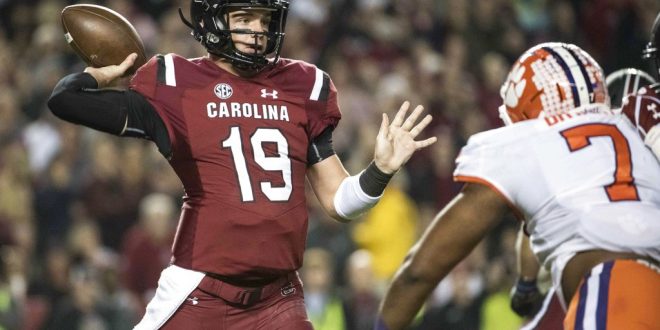 FILE - In this Nov. 25, 2017, file photo, South Carolina quarterback Jake Bentley (19) attempts a pass against Clemson defensive end Austin Bryant (7) during the first half of an NCAA college football game, in Columbia, S.C. South Carolina coach Will Muschamp says Bentley is expected to start against No. 22 Texas A&M after missing last week's game with a left knee injury. Muschamp says Bentley has practiced well and unless there's a setback will go against the Aggies on Saturday. (AP Photo/Sean Rayford, File)

Both football teams’ head coaches certainly know a thing or two about one another. Aggies head coach Jimbo Fischer and Gamecocks head coach Will Muschamp will look across the field and have to put their friendship aside during the game this weekend. With Muschamp’s defensive coaching style and Fischer’s offensive style, it should be a battle of play calling on Saturday.

They both still have great respect for one another but Fischer said preparing for Texas A&M is giving him quite the headache. Muschamp knows all three sides of the ball.

And on the other hand, Muschamp said he doesn’t always enjoy playing against friends because he knows that there is nobody on a game day that wants to win more than they do.

South Carolina is currently 3-2 overall and 2-2 in SEC play. The Gamecocks had an out of the ordinary game last week against Missouri. The five hour and 13-minute game full of rain and lightning made for quite the emotional win.

South Carolina picked up two SEC player honors this week. SEC freshman of the week went to defensive back Jaycee Horn. In last weeks’ game, Horn and the rest of South Carolina’s defense held Missouri to just 17-of-36 passing for 204 yards. He also recorded three tackles on his own.

The first of many! Congrats to the @SEC freshman of the week, @jayceehorn_10! pic.twitter.com/e7bHGZliHF

The other SEC honor was given to kicker Parker White. He shared the special teams co-player of the week with Texas A&M’s Braden Mann. White hit all three of his field goals and all of them were scored to give South Carolina the lead.

Hit on all three of his FG attempts, connecting from a season-long 42 yards on two occasions, and a 33-yard game-winner with just two seconds remaining.@parker_white4 is the #SECFB Co-Special Teams POTW. pic.twitter.com/FEtsaaj0iF

A helpful factor for the Gamecocks against the Aggies could be the return of starting QB, Jake Bentley. He was out last week with an injured knee and is expected to make a return under center with a brace on his knee.

No. 22 Texas A&M is sitting at a 4-2 and 2-1 SEC record this season. The Aggies gave Kentucky a huge 20-14 upset in overtime last week. The win also gave Fischer his first SEC home win as head coach.

Prior to last weeks’ game, Kentucky was the SEC’s leading rushing team. Texas A&M held them to only 70 yards on the ground and 178 yards in total offense. Fischer said his team is going to have play physical again and be sure to finish their drives on offense.

For the second week in a row, Braden Mann picked up his SEC player of the week honor. He is well on track to break Texas A&M’s record as he is averaging 54 yards per punt.

The Aggies are now leading the SEC in third down conversions and with their SEC special teams co-player of the week, they are looking to be the favorite in this weeks matchup.

Kickoff between these two SEC teams is set for 3:30 p.m. EST. The game at Williams-Brice Stadium will also be aired live on SEC Network.

Junior studying telecommunications- news at the University of Florida. Multimedia Sports Reporter for ESPN Gainesville as well as a Multimedia Journalist for WUFT News.
@acheney21
Previous Tide Aim to Stay Perfect as Missouri comes to town
Next Jimmy Butler has a Heated Practice with Minnesota Timberwolves