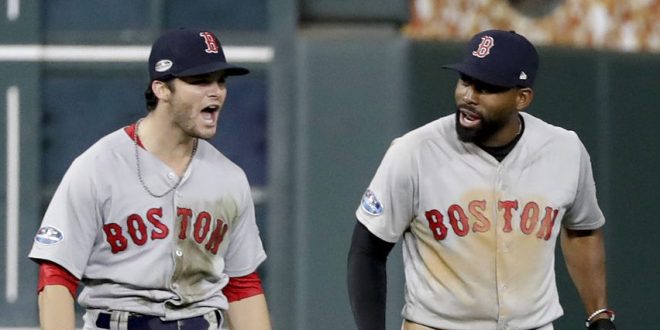 ALCS: Red Sox One Win Away from Clinching Pennant

There was early controversy in Game 4. What would’ve been a 2-run, game-tying home run from Jose Altuve was waved-off for fan interference in the first inning.

They need to be sure if they're going to take away a home run. They weren't. And that's why the Red Sox' epic 8-6 Game 4 victory was marred by the interference call that took Jose Altuve's homer off the board. https://t.co/wXpB1IVX9V @EvanDrellich pic.twitter.com/YN6JeLyBiR

The team’s battled back-and-forth, trading leads until the top of the sixth inning. Then, a 2-run home run off the bat of Jackie Bradley Jr. regained the Sox’ lead and they never looked back.

It came down the wire as closer Craig Kimbrel was assigned to get the last six outs. Kimbrel was shaky, but was able to work out of a bases-loaded jam in the bottom of the ninth inning to seal the win.

Kimbrel was helped by a diving catch from left fielder Andrew Benintendi to record the last out of the game. Houston’s Alex Bregman hit a line drive to left field with the bases loaded that could’ve tied the game.

ANDREW BENINTENDI HAS THE RED SOX ONE WIN AWAY FROM THE WORLD SERIES #SCtop10 pic.twitter.com/jiroz0r794

With their back’s against the wall, the defending champion Astros must crawl out of 3-1 series hole. However, they first have to win Game 5, which could be their final game on their home turf this season.

David Price will get the nod for the Sox, looking to get his first postseason win in his last 11 attempts. Price has struggled throughout the postseason so far, but a good enough outing to send the Sox to the World Series could help Price write-off his struggles.

After earning the victory in Game 1, Justin Verlander will take the mound for the Astros in Game 5.

The veteran right-hander will try to keep his team’s season alive as the Astros face elimination tonight in Game 5 of the ALCS at 8:09 p.m.