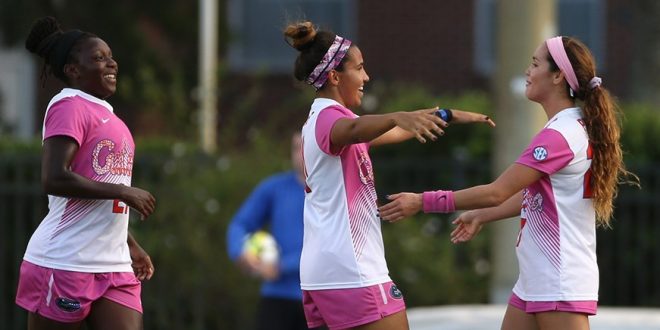 The Florida soccer team is back in Gainesville tonight after two games on the road. Tonight, the Gators will host the Georgia Bulldogs. Florida’s path this season has not been the easiest, with an overall record of 4-8-2 (2-3-2 SEC). But, the Bulldogs are a similar 4-7-4, with a worse conference record of 1-4-2.

Can Tonight’s Results Shake up the SEC?

Maybe. As of right now, neither Florida nor Georgia is an SEC tournament contender. Only the top eight teams in the conference will see tournament action. Florida is currently ranked ninth and Georgia is 12th. However, there are seven teams who can make or break the standings, which includes both the Gators and the Bulldogs.

If Florida wins, the team’s conference record will move to 3-3-2. There are three teams (Auburn, LSU, Ole Miss) in front of the Gators that are sitting at 3-3-1. If any of those teams lose tonight, a Gator win can put the team in the running.

If Georgia wins, the Bulldogs will move to 3-4-2 in the SEC. That means Georgia has a chance to leapfrog up to six teams for a spot, depending on how the rest of tonight’s games shake out. If Florida falls to 2-4-2, the team could fall three or four spots, making it more difficult to compete in the tournament.

Playing for a Cause

The Gators will be focusing on getting their fifth season win tonight. But, they will also be playing for something bigger than that. October is Breast Cancer Awareness month, so the team will be decked out in pink.

Coach Becky Burleigh is allowing the team to make the awareness more all-inclusive. Instead of just limiting the match to support of the fight against breast cancer, each player will wear a colored wristband to match a ribbon in support of awareness of other forms of cancer.

Sophomore Lauren Evans is a survivor of leukemia, giving the team a heightened sense of what the fight against the disease entails.

Also, children attending the match are encouraged to wear Halloween costumes, as the Gators will be handing out candy post-game.

Gametime is set for 6:30 in Donald R. Dizney Stadium. Up next, the Gators will hit the road for a Sunday match against Missouri.