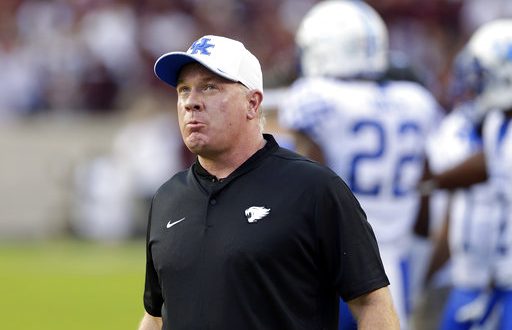 Two teams looking to get back on track will face off on Saturday night in an interesting SEC matchup from Kroger Field.

After winning their first five games of the season, Kentucky suffered a shock defeat to Texas A&M in overtime on Oct. 6. Mark Stoops has now had two weeks to prepare his team for another crack at their fourth SEC win.

There’s little doubt that an entire week of rest is just what Kentucky needed after their lone loss this season.

Stoops talked about how his team will benefit from the added rest.

Kentucky will want to get back to what they’ve done well all season long on Saturday. Running back Benny Snell Jr. was limited to only 60 yards on the ground against A&M– his lowest total of the season.

Quarterback Terry Wilson only mustered 108 yards through the air as well. Combine those two statistics, and that mostly explains why they could only score 14 points on the road.

Stoops will be eager to see his offense get back on track in front of their home crowd.

Commodores getting closer but are still desperate

Last week it looked like Derek Mason’s team was gonna produce an impressive home performance to snag their first SEC win of the season. They were leading Florida 21-3 at one point in the second quarter.

Dereck Mason’s defense proceeded to collapse in the second half.

They gave up 17 points in the fourth quarter alone. Gators quarterback, Feleipe Franks, was allowed to throw for a career high in passing yards (284). The Commodores were also gashed for a grueling 292 yards on the ground.

Mason’s team will need to come up with a much better defensive performance against an equally potent offense. Still, there were positives for Mason to take from that game.

Mason said he liked how his team started quickly last week. They also had a number of big plays that went for huge yardage including a 75-yard touchdown catch by running back Ke’Shawn Vaughn.

He’s also aware that Kentucky has a very ferocious defensive front that could cause some problems for his offense.

Mason knows his offense will need to keep his defense off the field to have a shot against the Wildcats. His senior quarterback, Kyle Shurmur, will likely need to complete more than 50 percent of his passes for that to happen.

While he said his team learned a lot from last week’s loss, a third consecutive defeat won’t lift any pressure off Mason.

Coach's Show gives you all the info you need for tomorrow's clash with the Cats! #AnchorDown | #RTI

Sports media and management student at the University of Florida. Content creator for ESPN 98.1 FM/ 850 AM WRUF.
@TheEdgarChavero
Previous What Florida Gators football players are doing during the bye week
Next Miami Dolphins vs. Detroit Lions Preview