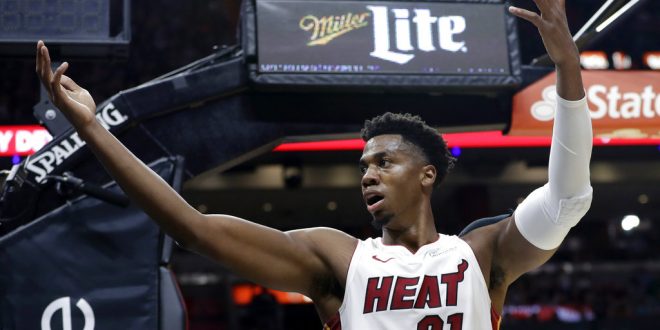 Miami Heat center Hassan Whiteside encourages the crowd during the second half of an NBA basketball game against the New York Knicks, Wednesday, Oct. 24, 2018, in Miami. The Heat won 110-87. (AP Photo/Lynne Sladky)

The Miami Heat were able to improve their record to 2-2 on the young season after thrashing the New York Knicks 110-87 Wednesday. After only leading by two points at halftime, the Heat were able to pull away thanks to a 45-point outburst in the 3rd quarter.

The Heat were led by center Hassan Whiteside, who poured in 22 points and grabbed 14 rebounds to record his third double-double of the season. Whiteside, whose name was heavily thrown around in trade rumors, is now letting his game do the talking. Whiteside is averaging 13.5 points per game and 14.3 rebounds per game to start the season.

Whiteside was also a force on the defensive side of the ball. Making things difficult for Knicks shooters all night, Whiteside added three blocked shots to go along with his strong performance.

Whiteside wasn’t the only Heat player who performed well against the Knicks. In fact, all of Miami’s starters were able to reach double-digits in points.

The Heat were graced with the presence of former power forward and 2-time NBA champion with the Heat, Chris Bosh.

Due to a blood clotting condition, Bosh hasn’t played in the league since 2016. However, Bosh, 34, is still maintaining the hope of a possible NBA return.

There was another homecoming for the Heat Wednesday night. However, it was for the man in charge of the Knicks. Knicks head coach David Fizdale made his return to American Airlines Arena, where he was an assistant coach for the Heat from 2008 to 2016.

Now in his first year as head coach in New York, Fizdale’s return to Miami didn’t go as planned.

Looking to ride off the momentum from Wednesday’s blowout win, the Heat will prepare for the Portland Trail Blazers. The Blazers will travel to South Beach for a meeting against the Heat on Saturday at 8 p.m.