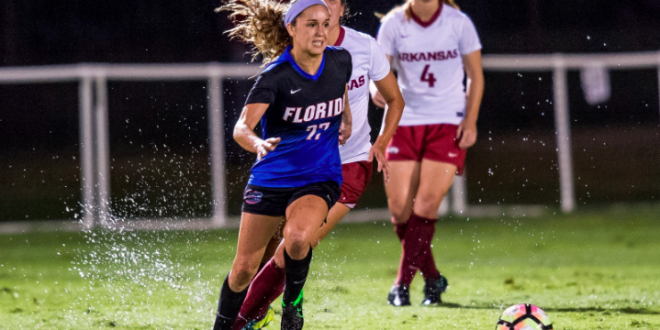 The Florida soccer team will play the Arkansas Razorbacks tonight at the Diz. The Gators currently lead a five-man race for the final spot in the SEC tournament. But, topping the Razorbacks will be no small feat.

Arkansas ranks 22nd in the nation and is in a three-way tie for second in the SEC. The Hogs’ overall record is 11-3-3 and are 6-2-1 in conference play. On the other hand, Florida did not play up to its typical standards this season. The Gators are just 5-9-3 overall, posting an SEC record of 3-5-2.

The team played four teams ranked in the top ten this season, losing to three and tying then-No. 2 UCLA. But, Arkansas’ four results (two wins, two ties) over ranked teams might be difficult to overcome.

However, with the Gators’ season on the line, the players know what is at stake tonight.

If Florida falls to Arkansas, the team’s season is over. If the Gators pull out a win, they move onto the SEC tournament. Seven of the eight available spots are clinched, one of them by the Razorbacks.

Florida’s eleven points give the Gators the highest chance to make it to Orange Beach. But, how does a draw work in? A win is three points, a tie is one, and a loss is zero.

Auburn and Missouri trail Florida with ten points apiece and Mississippi State and Alabama each have eight points. If the Gators tie the Razorbacks, the other four teams in the running would need to lose or draw for Florida to make an appearance in the tournament. But, that’s not out of the question.

Auburn and Alabama play each other, so if a tie occurs, neither will make it in. If one of the teams wins, a Gators win would put them ahead. Missouri plays T-2nd Tennessee and Miss State plays 6th-ranked LSU.

Tonight is also Senior Night for the 10-woman senior class.

This ceremony will take place pre-game. Kickoff is set for 6:30.

Chris O'Brien is a rising sophomore at the University of Florida. He aspires to be an on-air sports anchor someday.
Previous World Series Game 2: Boston takes 2-0 series lead by capitalizing on mistakes
Next Miami Heat bounce back for blowout win over New York Knicks