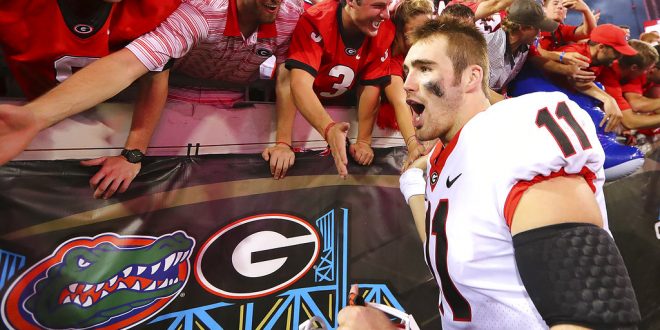 Georgia Regains Favor in SEC East with Win Over Florida

The seventh-ranked Georgia Bulldogs handed the ninth-ranked Florida Gators their second loss of the season, beating the Gators by a score of 36-17.

This was the first top-ten matchup between these two teams since 2008.

The Gators got off to a sloppy start, allowing the Bulldogs to score on their first drive. Georgia ran 12 plays for 71 yards leading up to a 21-yd field goal from Rodrigo Blankenship. The Bulldogs got the ball back quickly after a fumble by Florida’s Jordan Scarlett. This fumble resulted in a 16-yd touchdown pass for Georgia.

The Gators got on the board in the second quarter. An impressive run from Scarlett led to a 1-yd touchdown carry from Franks.

The Gators got the ball back at the end of the second quarter after a huge stop on third-and-one, courtesy of Shawn Davis. However, they were forced to punt on fourth-and-eight with 0:50 left. Georgia led 13-7 at the half.

The Gators opened the second half with a touchdown in the first minute and a half. A 36-yd pass from Franks to Freddie Swain put Florida up 14-13.

However, Georgia responded quickly with a touchdown of their own thanks to a 12-yd pass from Fromm to Holloman.

A fumble from Franks at the end of the third quarter gave Georgia the ball at Florida’s 1-yd line. This would lead to an 18-yd field goal, but not before the Gators stopped the Bulldogs 6 times inside the 5-yd line.

Receiver Freddie Swain said he was frustrated by the number of turnovers the team gave up.

The Gators failed to score more than another field goal, losing the game by a final score of 36-17. The Gators’ Jordan Scarlett said the loss came down to a lack of execution.

The Gators return to the Swamp next week as they take on Missouri in another SEC matchup on Saturday.

Born and raised at the ballpark! Typically quiet- until it comes to sports. I'm a South Florida native with a passion for baseball nearly as strong as my faith. Grew up in garnet + gold, turned out sporting orange + blue. Likely to be found with a camera. And yes, I take food pictures.
@victoriarossman
Previous NBA: Lakers Earn First Home Win, Thunder Still Winless
Next Three Turnovers Hurt Gators in 36-17 Loss to Georgia