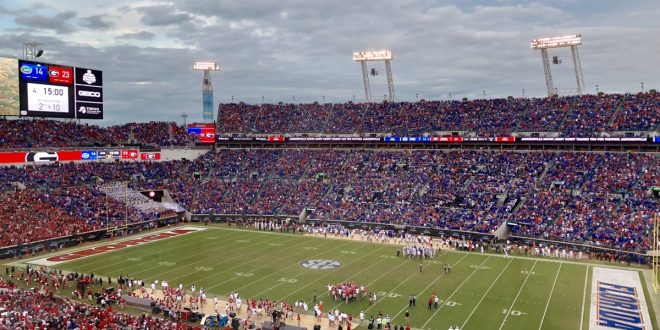 “It might have been our worst execution performance of the year and I am really disappointed with that,” head coach Dan Mullen said in his post-game presser Saturday.

It was a rough Saturday for the No. 9 Florida Gators as they fell 36-17 to their SEC rival No. 7 Georgia. These two teams faced off in Jacksonville for their annual rivalry in an SEC top-10 matchup.

The Dawgs had an impressive game dominating in the air and on the ground. QB Jake Fromm went 17-24 for 240 yards and three touchdowns. Also, Georgia did not turn the ball over once. However, the same cannot be said for the Gators.

Although Florida had several highs and lows during Saturday’s annual rivalry showdown, one thing the team really struggled with was ball security. Florida’s QB Feleipe Franks completed 13-21 passes for a season-low 105 yards, with one touchdown and one interception. The Gators fumbled twice, with Franks responsible for one of them on Florida’s own 1-yard line.

Where did they go wrong?

Early in the first quarter, Florida had the ball and they were working their way down the field when bam. Running back Jordan Scarlett fumbled the ball and it was recovered by Georgia defensive back Richard LeCounte III. Fromm and Georgia’s offense took advantage of the Gators mistake, and first turnover, by scoring a touchdown.

“Just to forget about it, things happen,” Scarlett shared on what he did after the fumble. “Just go play the next play and take advantage of what you can control.”

The next error that cost the Gators was an interception thrown by Franks. He intended his pass for Josh Hammond, but it was picked off by Georgia defensive back Tyrique McGhee. The Dawgs didn’t end up scoring on this interception, but it still hurt the Gators as they were trailing by 10 late in the first and were in Georgia territory when it happened.

The turnovers for Florida did not end there. Late in the third quarter, Florida was on their 1-yard line, when another fumbled occurred. This time, at the hands of Franks. Georgia tried repeatedly to get a touchdown, but Florida’s defense was not going to the that happen.

Six-plays, zero-yards later, the Dawgs opted for an 18-yard field goal which extended their lead to 23-14.

During the post-game presser, Florida QB Franks acknowledged his mishaps during the game and knows he, and the team, just have to keep working at it.

“You try to avoid turnovers and I’ve got to get better at that,” Franks assessed.

With this loss, Florida’s five-game win streak is over. They’ll return home for their next three games against Missouri, South Carolina, and Idaho. The Gators are now 6-2 on the season and 4-2 in the SEC.

This may have been a tough loss for the Gators, but head coach Dan Mullen says the team and himself need to be ready for next week.

“I’ve said for the most part, every game I think we’ve played better from one week to the next,” Mullen started. “I can’t say that today. So we need to get that better by next Saturday.”