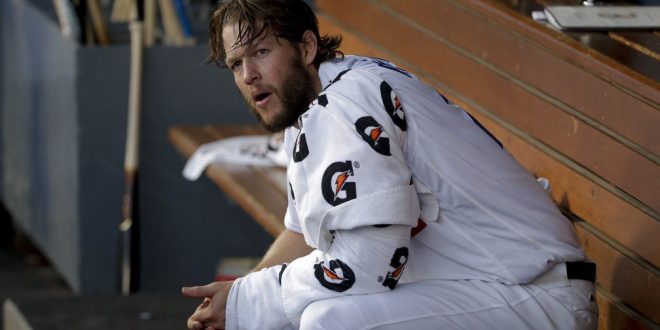 Clayton Kershaw: Staying in L.A. or Walking Away?

The Los Angeles Dodgers lost the World Series to the Boston Red Sox 5-1 on Sunday night.

But there’s a chance they could lose something else – lefty pitcher Clayton Kershaw.

What is Kershaw Thinking?

Kershaw’s current deal with the Dodgers pays out nearly $70 million over the next two years. If he decides to opt out of that contract, he can either sign a new deal with the team or enter free agency in November.

The 30-year-old has an important decision to make about his future this week. But he’s not saying much about it right now.

It’s Apparent They Want Him to Stay

When Dodgers’ manager Dave Roberts spoke to the media Sunday night, he made it a point to address the situation with Kershaw.

Fellow teammate and pitcher Rich Hill had positive words to say about Kershaw.

“Clayton is the Dodgers,” Hill told reporters. “He’s the heart and soul of this organization.”

Kenley Jansen, another Dodgers pitcher, also had high praise for his teammate.

“He might go down as one of the best lefties to ever play this game,” Jensen told the media. “I don’t want to be selfish, but hopefully he will be here next year.”

The Dodgers lost the World Series for the second year in a row. In Sunday night’s Game 5 loss to Boston, Kershaw allowed four runs on three home runs in the first seven innings.

Dylan Hernandez of the L.A. Times wrote that there was “feeling of finality” to Kershaw’s start in that game.

“The ending was familiar, except this didn’t feel like any of his previous failures. This felt more conclusive. This felt like the end of an era,” wrote Hernandez. “Part of that was because there is a very real chance he won’t be on this team next year.”

Kershaw has been playing with the Dodgers since 2008. His departure from L.A. would truly be the end to an era.

Camille Woodhouse is a Sports and Media student at the University of Florida College of Journalism and Communications. In the past, she has covered the Atlanta Falcons and Florida Gators football for various sports news outlets. She is an Atlanta native and a fan of football.
@CJW_SportsRadio
Previous Red Sox Win 2018 World Series in Game 5
Next Chiefs Dominate, Rams Remain Undefeated, Panthers Return