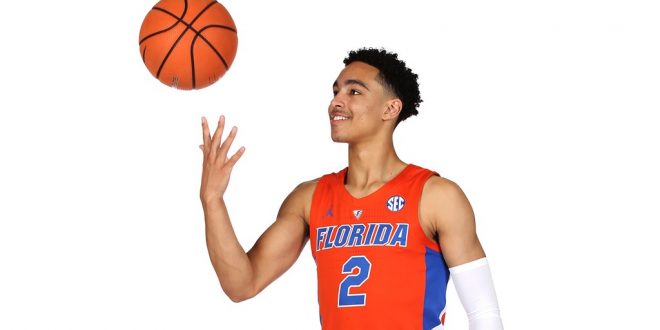 It has been 227 days since the Florida Gator men’s basketball team had their last game. Florida is making their return to the Exactech Arena tonight. The team will look much different than years past without starting guard Chris Chiozza.

Chiozza was a familiar face for fans during his four years at UF. Head Coach Mike White gained a five-star freshman point guard, Andrew Nembhard, who will try and fill in for the team where Chiozza left off.

Preparation as a Freshman

It is often times tough for athletes to transition from being the high school star-athlete to their freshman year of college. Nembhard says that his teammates have helped him in this transition.

Something the Florida team had a lack of last year was vocal leadership on the court. Coach White continued to talk about his team’s leadership issues throughout the 2017-2018 season. Although he is just a freshman, Nembhard said this summer helped him to continue to improve on his leadership skills.

For Nembhard, he said that he’s ready to take the practice and preparation with the Gators over the last few months to the court tonight.

Nembhard is originally from Ontario, Canada. He graduated high school in Florida from Montverde Academy. Nembhard was the 23rd ranked recruit in the nation in high school.

Nembhard lead Montverde Academy to the national championship in his 2017-2018 season. In the championship game he had 13 assists and no turnovers. Nembhard’s ability to pass and see the floor as a 6-4 point-guard is something unique to his style of play.

In one of Nembhard’s more recent tournaments, Nembhard averaged 8.8 assists and 2.7 steals in his six games played at the U18 America’s Championship while playing for Canada.

While Nembhard’s passing ability is spectacular, he will also take it to the hoop and can finish at the rim.

Nembhard committed to the University of Florida last October and said that he is ready to officially take the court as a Gator. He said he is looking forward to playing in front of Florida’s well-known student section.