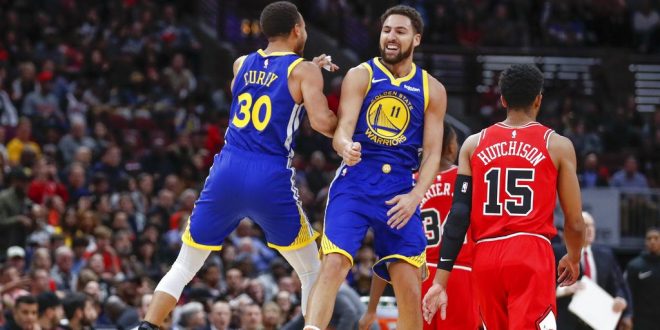 Klay Thompson is considered one of the best shooters in NBA history. On top of that, he now owns a prestigious 3-point shooting record. Thompson is so vulnerable to shooting slumps that when he opened the season going 5-for-36 form the three (13.9 percent), his teammates weren’t even worried about it. In fact, not only did they know that he would snap out of it, but that he would snap out of it in a dominant style.

Thompson scored 52 points against the Chicago Bulls on Monday night in a 149-124 blowout victory in Chicago to break out of his slump. Thompson hit a record 14 three-pointers to break Stephen Curry’s record (13) for most three’s in a game. What’s absurd about this stat line is that it only took him 27 minutes to make history.

With @KlayThompson’s NBA record 14 three-pointers tonight, we look back at the previous record of 13 by his teammate @StephenCurry30 (11/7/2016)! #NBAVault pic.twitter.com/DTm8Gf5C31

Records Are Meant to be Broken

It took Thompson 24 attempts from beyond the arc to accomplish the record setting night. 36 of his game high 52 points came in the first half as the Warriors also set an NBA record for most threes in a half with 17. Thompson hit six three pointers in the first half, surpassing what he’s accomplished all season thus far. The Warriors also set the second highest first half by a team in NBA history with 92 points, nearly doubling Chicago’s score. Most points in a half belongs to the Phoenix Suns with 107 points back in 1990.

No one in the warriors starting give played more than 28 minutes due to high-scoring margin. Nights like these are brutal reminders of how unstoppable the warriors are.

Early in the third quarter, Thompson received a gash on his forehead from running into teammate Damian Jones. He had to place a yellow headband on that mostly covered his ears. Thompson was just shy of his thirteenth three-pointer when this occurred and stepped back on to the court.

He hit the record tying three with ease but missed four in a row following his successful attempt.

The, late in the fourth quarter with about five minutes left, Thompson came off a screen set up by Curry and Durant set him up from the near side arc with two defenders on him. He had some pressure but was fortunate enough to knock down his 14th three in a single game.

Furthermore, Thompson is grateful for the teammates that he has due to the effort and unselfishness throughout the game. Draymond Green provided a game-high 11 assists and Kevin Durant dished out eight assists on the historic night.

Recent grad from the University of Florida. Editing all articles on here while helping out the newbies. Love all things basketball.
@@MarcoJMartinez_
Previous Dan Mullen Disappointed with Florida-Georgia Performance
Next Andrew Nembhard: Five-Star Freshman for Florida Basketball