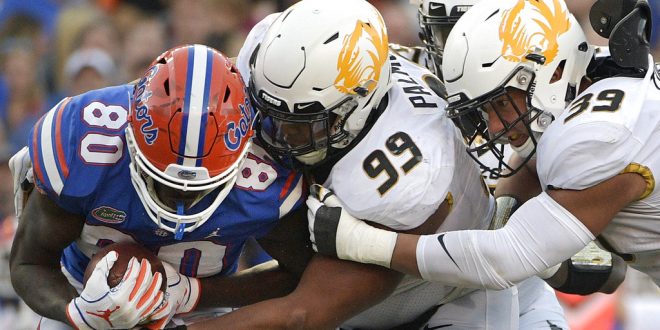 Florida tight end C'yontai Lewis (80) is stopped for a loss by Missouri defensive linemen Walter Palmore (99) and Chris Turner (39) after catching a pass during the second half of an NCAA college football game Saturday, Nov. 3, 2018, in Gainesville, Fla. (AP Photo/Phelan M. Ebenhack)

So much for a happy homecoming.

“Obviously, disappointing performance by us today and alot of that, that’s all on the coaches… I don’t think we played very well at all,” Florida head coach Dan Mullen said.

It’s also the first SEC win of the season for Missouri after they came in to Gainesville 0-4 in conference games.

QB Feleipe Franks had another poor performance for Florida, going 9-for-22 for 84 yards against what came in as the 122nd ranked pass defense (288 yards per game).

Such was the lack of success on offense that Kyle Trask replaced Franks midway through the third quarter, to a roar of cheers. Trask did well, immediately leading a touchdown drive and ending with a stat line of 10-for-18 for 126 yards and a touchdown.

Florida came out of the gates flat, and the Tigers raced out to a 21-3 lead midway through the second quarter.

Drives of nine, four, and seven plays culminated in a 27-yard TD run by Larry Rountree III, a 22-yard TD catch by Al Okwuegbunam, and a 4-yard TD run by Damar Crockett respectively.

The Gators couldn’t get a touchdown on the board until they drove 75 yards down the field on 10 plays, ending with a 4-yard keeper from Franks less than two minutes from halftime.

Florida got the ball back to start the second half and could have made it a one possession game, but instead went three-and-out to start the half.

Missouri then put the game out of hand, with Lock touchdown passes to Kam Scott and Emmanuel Hall on back-to-back possession in the third quarter enough to send alot of the homecoming crowd out of the stands.

Trask’s touchdown pass came on his first drive, late in the third quarter on a fourth-down throw to Josh Hammond on what was Florida’s most energized possession of the game.

So proud of our son proving what he can do if given a chance! Go Gators! pic.twitter.com/ayvhyweuaY

Florida struggled equally on both sides of the ball, but the biggest story will be on the offensive side, namely Franks and Trask.

It couldn’t get anything going for most of the game, with the team seemingly never getting in a good flow.

It didn’t help that Missouri’s run defense was typically stout (113 yards on 28 carries), but Franks did himself no favors either. He had numerous overthrows, with groans and boos of the crowd growing with each one. And when the Gators were in position to extend drives, the offense couldn’t deliver, going 3-for-15 on 3rd downs.

Mullen said that Trask was put in to spark the offense and doesn’t necessarily mean that Franks was being permanently benched. But after Trask’s performance and the poor play from Franks over the last four quarters, it is telling that Mullen didn’t definitively name a starter for next week’s game against South Carolina.

“We’ll see how they perform this week and if there is a drastic change, we’ll make a change,” Mullen said. “And if not, we’re gonna play whoever give us the best chance to win.”

Meanwhile defensively, Florida got torched through the air for the second straight week.

That in part was due to Lock’s NFL caliber arm. But another factor in that was Florida’s absent pass rush (one sack, no quarterback hurries). What came in as the second best pass defense in the SEC has now shown in two straight weeks that they struggle to defend through the air when it fails to get consistent pressure (one sack against Georgia.)

Additionally, the Gators struggled to wrap up and tackle, which showed in Missouri’s ability to consistently convert on 3rd down (11-for-17).

Florida takes South Carolina next week in Gainesville in its final SEC game of the season.