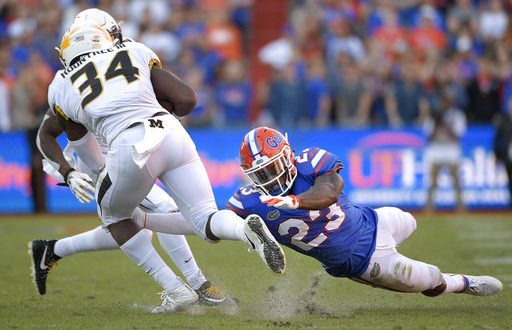 Missouri running back Larry Rountree III (34) is tripped by Florida defensive back Chauncey Gardner-Johnson (23) after catching a pass during the first half of an NCAA college football game Saturday, Nov. 3, 2018, in Gainesville, Fla. (AP Photo/Phelan M. Ebenhack)

Florida football coach Dan Mullen was asked if he was surprised by the number of issues his defense is having after the Gators’ disheartening 38-17 loss to Missouri (5-4, 1-4) on Saturday.

But the dejected Mullen said “surprised” isn’t quite the right word to describe his thoughts.

The loss marks Florida’s (6-3, 4-3) second straight defeat and another disturbingly poor performance from its defense.

On a night in which Feleipe Frank’s premature withdrawal may warrant all the attention, the Gators’ deficiencies on defense may be even more worrisome for Mullen and his staff.

Mullen went on to say that he and his coaching staff must now work on redrawing a proper game plan to put his players in positions to succeed.

Early in the season Florida’s defensive front looked like one of the most daunting groups on the team — potentially even the SEC. Mullen’s defense has now recorded the same number of sacks as they have losses the last two weeks.

Quarterback Drew Lock was given plenty of time to pick apart Florida’s depleted secondary. The senior really showcased his entire skill set in Gainesville, as he finished with 250 yards through the air and three touchdowns to his name.

Lock was incredibly accurate all day completing 75 percent of his passes. There’s no doubt that he demonstrated why he’s touted as one of the top quarterback prospects in college football.

On the ground, running backs Damarea Crockett and Larry Rountree III were an equally impressive tandem. They both ran with power and purpose. Florida’s defense also suffered from a number of missed tackles in the trenches and the secondary.

Both reached the end zone on the night, and Crockett eclipsed 100 yards rushing for just the second time this season. Time and time again they were given holes and gaps to exploit and they took full advantage.

The likes of juniors like Jachai Polite, Jabari Zuniga, Chauncey Gardner-Johnson and sophomore Kyree Campbell were all guilty of their share of missed tackles or penalties against the Tigers.

There’s no question Florida has the talent up front to play better defense than they have recently. Mullen shouldered most of the blame after the game, but it’ll be up to his players to show their still capable of more.

📹 HIGHLIGHTS #Mizzou records its first road victory over a ranked team since 2014, upending No. 13 Florida, 38-17 at The Swamp.#MIZ #ShowMe 🐯🏈 pic.twitter.com/DeZkYRuEn8

Depth at defensive back exposed by Lock

Mullen admitted himself that his defense’s lack of depth is tough to manage this late in the season. Still, it was all too easy for Lock to spread the ball around.

In the first quarter sophomore tight end, Albert Okwuegbunam, broke free for a 22-yard touchdown catch. At that point he had four catches and was a menace to cover but had to exit the game with a foot sprain.

In his absence, wide receivers Emanuel Hall and Kam Scott flourished. The pair beat a number of the Gators’ corners. Even combative sophomore C.J. Henderson had his fair share of issues in coverage after a pair of nice plays in the first half.

More than anything the Gators’ defense was guilty of not stopping the bleeding at various points. Again, a defensive back unit that had been successful earlier is now faltering.

This week defensive coordinator Todd Grantham will have to prepare for another SEC-home bout against South Carolina. He and Mullen will need to batten down the hatches on defense and repair the unit’s confidence quickly to give his team a chance.

While the Gators’ offense equally sputtered, no matter who’s under center, Mullen knows his defense is capable of more.

Back in The Swamp next week.