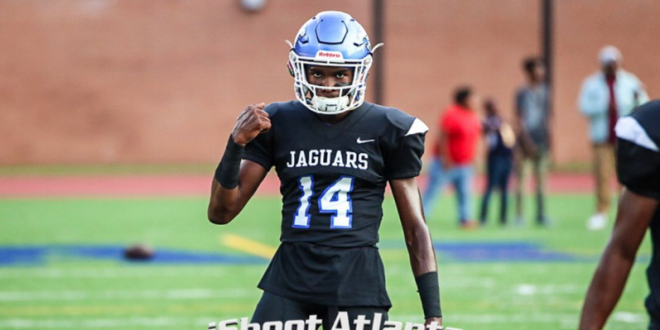 It was a rough day in the Swamp for the Gators, who lost their homecoming game 38-17 to Missouri. However, three good things happened during the final minutes of the game. Gator fans finally got to see Kyle Trask command the offense at QB. And the Gators got verbal commits from Kamar Wilcoxson and Gervon Dexter, who both announced their commitment on Twitter.

Kamar Wilcoxson is only in 10th grade, but made the decision that Florida was the school for him Saturday night. “Today was the right time,” Wilcoxson said “because it’s been on my mind for a minute, but when I could get down and talk to Coach Mullen face to face and see where his mind was I knew this was the school for me.”

“I can tell Coach Mullen has his players best interest at heart just by the conversation we had before I committed.” He also likes how the Gators have been developing players at DB.

Wilcoxson is hoping to come back down for the South Carolina game.

Gervon Dexter only recently got an offer from the Gators back on October 22nd. Currently he also holds offers from Mississippi St, Tennessee, and Georgia just to name a few. He is a good size high school DT sittings at 6-6.5. 260 pounds. Dexter said that he chose UF “… to pursue my dreams, academic and athletic career.”

Hill knows the team is thin in the secondary and see’s an opportunity to shine. He tore his ACL, but says the rehab has been good.

Hill is a big recruiter for the Gators.  Two of the guys Hill has been trying to get is Auburn commit Jaren Handy and UGA commit Travon Walker.

Hill says that he would like to come back to Gainesville next week. However, he probably won’t be able to, because his high school team has a game.

Khris Bogle said the coaching change at Florida has really made it a family environment. He also explained that he’s on the same wave length as Coach Grantham and Coach Mullen, which is an important factor in his decision making.

Jadon Hill is the person that convinced Bogle to come to the game (told you Hill is a good recruiter).

Bogle is going to Alabama next week for an official visit. He has two more officials, but hasn’t decided where he’ll be taking them. Bogle definitely wants to come back to Florida.

Michael Tarquin is verbally committed to Miami. Saturday was his first visit to UF since March. Tarquin has already taken an OV to Oklahoma, but has four more OV’s left he can take. He says it’s a possibility he’ll take one at Florida.

Tarquin expressed how he think the O-Line has improved.

He says that wherever he choose to spend his college career he will be enrolling early.