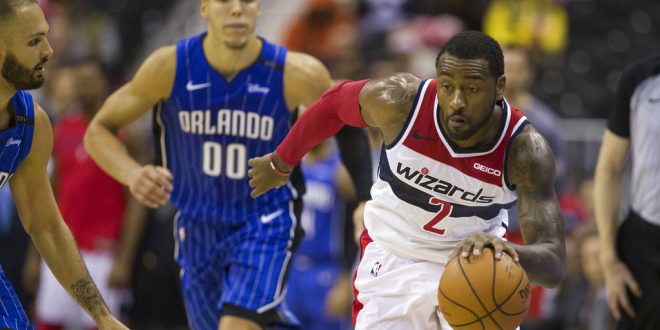 Washington Wizards guard John Wall (2) drives with the ball after a steal from Orlando Magic guard Evan Fournier, far left, from France, during the second half of an NBA basketball game Monday, Nov. 12, 2018, in Washington. The Wizards won 117-109. (AP Photo/Alex Brandon)

The Magic couldn’t come together in the final minutes of the game as the Washington Wizards managed to score 34 points in the fourth quarter, ultimately beating the Magic 117-109 in Washington D.C.

The game was a close one, as it entered the final quarter all tied up at 83 a piece. The Wizards were led behind John Wall’s 25 points in what seemed as a revenge game due to the Magic defeating the Wizards just four days ago in Orlando 117-108.

Actually, the loss to the Magic sparked a lot of controversy towards the Wizards, seeming like the front office and the players had already lost control of the season, due to a 2-9 start.

Now, the Wizards are on a two game winning streak, something they haven’t done all year and are feeling good about it. Head coach Scott Brooks mentions that defense played a huge role in Monday’s win.

“We got down 10. Couldn’t stay in front of the basketball. Fouling the shooters,” Brooks said. “And then we started defending,” according to The Washington Post.

This game was extremely important for the Wizards, at it commenced a five-game home-stand for the 4-9 struggling squad. Their new pieces in former NBA All-Star Dwight Howard and former LA Clipper Austin Rivers haven’t benefited as much as the team has wanted to. Rivers is averaging 7.0 ppg, his lowest since 2014. As for Howard, he just recently came off a lower-back injury and has only played six games so far in this young season. But, he’s averaging 13.0 points per game, his second lowest average since his rookie year back in 2004.

From the locker room, John, Brad, Dwight, Jeff, and Austin after Monday's win over the Magic.#WizMagic | #DCFamily pic.twitter.com/QmbeSGCwzW

The Wizards star-studded back court in John Wall and Gator alumnus Bradley Beal had chemistry difficulties last season. So far this year, their communication has gotten better and they both scored 20+ in their win against the Magic. Both are averaging 22 points per game which shows some upside for the remaining 60+ games of the season.

Plus, Wall has been on fire from beyond the arc recently. He went 2-for-3 against the Magic and is now 16-for-37 in his last seven matches, improving to 43% 3PFG.

Aaron Gordon and Nikola Vucevic both managed to top a double-double in 30+ minutes in their loss on Monday night. Five players posted in double digits, including Gordon, Vucevic, Terrence Ross, Evan Fournier and D.J Augustin.

Vucevic has been the most efficient player on the Magic’s roster this season. Currently averaging 18 points per game and 10 total rebounds. Any GM would be satisfied with those numbers. The Magic drafted Mohamed Bamba earlier this year who’s had a strong outing in his first couple of games in the NBA. Many speculated that Bamba would replace Vucevic in the near future. But as of right now, Vucevic has the upper hand.

The Wizards continue their five-game home-stand tomorrow night against the worst team in the NBA, the Cleveland Cavaliers at 7:00 P.M.