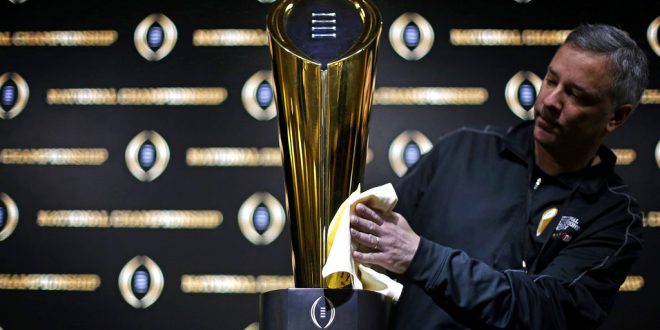 For the first time ever, the College Football Playoffs rankings top 10 remains unchanged from the week before.

The top four consist of Alabama, Clemson, Notre Dame and Michigan with Georgia and Oklahoma on the outside looking in. It is the 15th time in 28 rankings that the Crimson Tide have found themselves at the top of the polls.

As the season winds down, the top four are liking where they stand at the moment.

Alabama would most likely find themselves in the playoff even if they slip up and lose against Auburn or in the SEC Championship. Clemson will be heavy favorites in their final two regular season games against Duke and South Carolina. Pittsburgh looks like the team that is going to make it out of the ACC Coastal Division but even they will be heavy underdogs in the conference championship game.

Where chaos is most likely to happen is with Notre Dame and Michigan. The Fighting Irish have a top 15 match-up against Syracuse lined up this weekend and then have to travel to Southern California to face USC. Notre Dame expects Ian Brook to return from injury against Syracuse after missing a game against Florida State to play quarterback. The Irish don’t have to play a conference championship game so if they end up winning their final two contests they will most likely play in the CFP barring any unforeseen instances.

It has been an excellent year for Wolverines coach Jim Harbaugh and his squad as they have reeled off nine straight wins after losing to Notre Dame in the season opener.

After playing Indiana at home this weekend, Michigan has to go on the road against 10th ranked Ohio State with the winner playing Northwestern for a chance to make it to the playoff. The Wolverines will have to fight off some demons in two weeks as they will try to beat Ohio State for the first time since 2011. The Buckeyes have dominated the rivalry as they have won 13 out of the last 14 match ups. Ohio State will be the biggest rooters for chaos as they need to beat Michigan and gain some help from other teams in the top 10.

Florida In a Good Spot For A New Years Six Bowl

A year after going 4-7 and missing a bowl game all together, the number 13 Gators are in a good spot to be in a New Years Six bowl if they win out.

Florida faces Idaho at home this weekend and will be the favorites when they travel to Tallahassee to face the Seminoles the Saturday after Thanksgiving. USA Today projects the Gators to play in the Fiesta Bowl against Oklahoma while Bleacher Report has them playing West Virginia in the Peach Bowl.

Whether it be the Fiesta Bowl or the Peach Bowl, coach Dan Mullen and the Gators will have taken a big step from where they were this time last season.

Previous Lightning Fall Short to Sabres, Lose 2-1 On Road
Next Franks and UF look to gain more confidence against Idaho