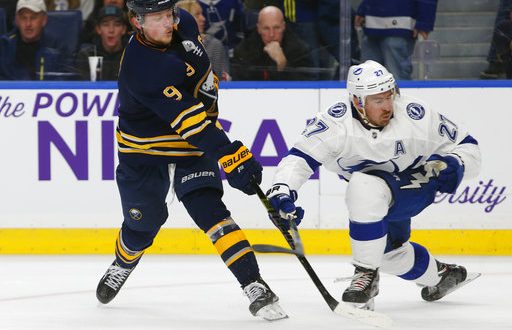 The Tampa Bay Lightning lost their second straight game with a 2-1 loss to the Buffalo Sabres on the road.

This wasn’t the same explosive offense that Tampa Bay has shown all season. Coming into this matchup, the Lightning had scored at least four goals in five straight games. The team was first in the league in goals per game with 3.6.

They had plenty of opportunities on Tuesday night, but the execution just wasn’t there. Tampa Bay got 30 shots on goal and they won 57% of their faceoffs. They failed to take advantage of their only power play of the night.

It wasn’t all just lack of finishing plays, however. Buffalo goalie Carter Hutton deserves plenty of praise for his outstanding performance. He had 29 saves and seemed to anticipate the Lightning’s passing all night.

In Carter We Trust pic.twitter.com/PL7NgGYdu5

The Lightning were desperate to tie this game up near the end, and they really put the pressure on the Sabres. Tampa Bay got off 6 shots in the final 2:41 of the third period. Hutton stopped a couple of shots from Anthony Cirelli and Mikhail Sergachev. Alex Killorn had a shot blocked. Brayden Point came up with a miss. Nikita Kucherov had two late attempts both hit the goal post from around the same spot. The Sabres came up with 17 blocked shots on the night.

The Lightning were close, but in the end, Buffalo’s defense coupled with a lack of execution led to the Tampa Bay loss.

"They had a push there, they're a good hockey team.. a top team in this league. We held it together."

"Obviously Carter made some key saves. It was great that our guys found a way to win." pic.twitter.com/AYq6ngWH0z

This is the first time all season that Tampa Bay has lost two games in a row. They dropped their previous game at home on Saturday to the Ottawa Senators by a score of 4-6. Despite the back-to-back losses, the Lightning still have the best record in the league at 12-5-1.

Next up for the Lightning is a trip to Pittsburgh to take on the Penguins. The Penguins have been struggling as of late, having lost six of their last seven games this season. Pittsburgh will likely be playing with a sense of urgency, but it is still a great chance for Tampa Bay to bounce back from these two losses.

The Lightning and Penguins game will take place on Thursday, November 15th at 7:00 p.m. ET.