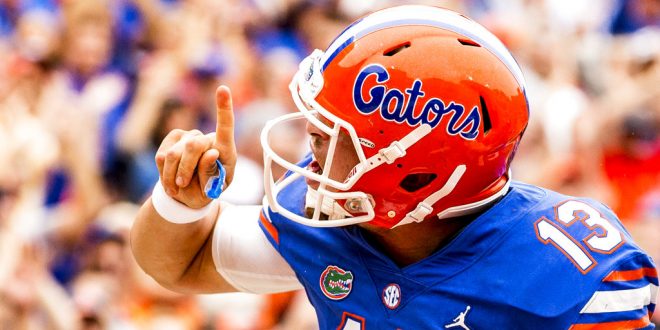 Franks and UF look to gain more confidence against Idaho

Florida quarterback Feleipe Franks and the Gators completed an impressive comeback on Saturday, beating the South Carolina Gamecocks 35-31. Down 31-14 late in the third quarter, UF stormed back behind its stable of running backs and a newly-confident Franks.  UF’s signal-caller was visibly intense for most of the game, playing with an obvious chip on his shoulder on his way to three total touchdowns (two rushing, one passing). The Gators will look to ride that new-found momentum into Saturday’s contest with the Idaho Vandals.

Franks hasn’t necessarily been a fan favorite among Gator Nation the last two weeks, underperforming against Georgia and Missouri. Last Saturday however, Franks played with a fire that hasn’t really been seen from him at Florida. It was more evident than ever, once he shushed the home crowd a couple of times during the game. The redshirt sophomore has been heavily criticized by Gator fans on social media, and it was obvious he was sick of it. Franks would go on to apologize after the game but results speak for themselves.

On Monday, Franks talked a little bit about the performance the team had against South Carolina.

Franks calls his own number

Feleipe Franks couldn't find the signal-caller to get the play on fourth-and-one near the goal line on Saturday.

So he dialed up his own number. "I was just super pissed. I just wanted to lower my head."https://t.co/N4ClGPZk6u pic.twitter.com/2M3ltpQM8A

Late in the game on Saturday, Florida’s offense was knocking on the door, looking to complete the comeback and give UF its first lead of the day. It was fourth and goal from the one-yard line, and UF’s quarterback was having issues finding the signalers on the sideline. So, he decided he’d take care of it himself. Franks talked a little bit about the situation on Monday.

More on the crucial play from Franks:

Passing was an afterthought for the Gators against South Carolina, as the team ran for 367 yards behind Lamical Perine and Jordan Scarlett. Perine picked up two rushing touchdowns with 107 yards on the ground, while Scarlett ran for a team-high 159 yards. And Franks added his two TD’s on the ground.   He gave high praise to his backfield.

Against Idaho and Florida State, it’s evident that Florida will need to continue to rely on its running game if they want to get to 9-3 before bowl season begins.