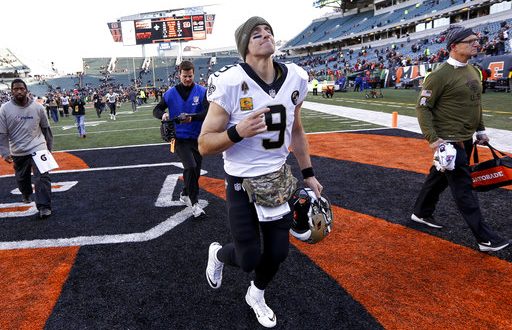 Although six teams have bye weeks in the NFL, the league isn’t letting up with it’s slate of interesting matchups this weekend.

The Seahawks (5-5) and the Packers (4-5-1) got the week started on Thursday night with a thrilling nail-biter. Russell Wilson led his team to a 27-24 victory at home against Aaron Rodgers and The Pack. It’s the Packers’ third loss in their last four games, as they’ve now fallen to third place in the NFC North.

Rodgers then shared his discontent for losing after the game.

This weekend should offer plenty of equally entertaining NFL action. A few teams will have plenty at stake entering Sunday.

While this game features two teams under .500, it’d be unfair to dismiss both these teams already. But the loser of this game will have a tough uphill battle the rest of the way.

Atlanta suffered easily their worst loss of the season last week on the road in Cleveland last week, 28-16. Despite throwing for 330 yards and two touchdowns, Matt Ryan was visibly frustrated on the sidelines near the end of the game.

For a team that’s looked inconsistent all season, this is probably a must-win game for Dan Quinn and the Falcons. Two of their next three games will come on the road to the Saints and Packers.

On the other hand, Jason Garrett earned a huge victory for his team, and his job security, last week against the Eagles. Dak Prescott was effective and explosive. The third-year man completed 72 percent of his passes on the night for 270 yards and two total touchdowns. The same could be said about running back Ezekiel Elliot. He rushed for 151 yards and a touchdown, as the Cowboys showed how effective their winning formula could be when they execute it properly.

A second straight road victory for the Cowboys could compile some pressure on the first-place Washington Redskins in the NFC East. Yet with their next three games against the same Redskins, the Saints and the Eagles again, this might be another game Garrett can’t afford to lose.

Surely, only a similarly balanced performance from the Cowboys will be enough to earn them a win against a desperate Falcons team. Kickoff is at 1 p.m. ET.

The current heavyweights of the NFC pitted against the reigning Super Bowl champions.

The Saints’ victories over the St. Louis Rams and Minnesota Vikings have fully made them the chauffeurs of the NFC. Another win on Sunday and they’ll sink an Eagles team that hasn’t hit their stride this season partly because of a slew of injuries.

Drew Brees passed Brett Favre on the all-time touchdown list last week against the Bengals. The veteran has fully emerged as an MVP candidate and potentially the only other player can rival the stellar production of Kansas City’s Patrick Mahomes.

Back at home, the NFL’s leading offense (36.7 ppg) will have to contend with a top-10 defense against the Eagles. It’ll be up to Carson Wentz and the Eagles’ offense to match the production of Brees, Alvin Kamara and co.

Sunday night’s game will be a first-place showdown in the NFC North.

The Chicago Bears have been probably the most pleasantly surprising team this season, as they’ve placed themselves in first place in their division.

The Bears have won three in a row, and their last loss came to no one other than the New England Patriots. The Vikings got back to winning ways after defeating the Lions 24-9 two Sundays ago. Coming off a bye week, Minnesota’s defense should be well prepared to deal with quarterback Mitchell Trubisky and Chicago’s high-powered offense.

At home, Chicago will likely rely on Trubisky to keep moving the ball. Chicago averages only 84 yards per game on the ground — second lowest to only the Saints. The Vikings have also had plenty of trouble running the ball themselves. Former Seminole, Dalvin Cook, has had trouble staying healthy, and it’s shouldered a lot of the load on Latavius Murray. Cook will be healthy on Sunday for the first time since Week 3.

In the end, this game may be decided by which quarterback can deliver when it matters most. Kirk Cousins and Trubisky have both been more than good for their new teams. With the Packers in a landslide, the division may be open for one of those two guys to make a statement on Sunday. Kickoff is at 8:20 p.m. ET for this one.

Tarik Cohen and the Bears are bringing the energy to Soldier Field against their division rival Vikings this week 😤 | ✍️ created using Galaxy Note9 (by @SamsungMobileUS) pic.twitter.com/r8hgisEUms

Sports media and management student at the University of Florida. Content creator for ESPN 98.1 FM/ 850 AM WRUF.
@TheEdgarChavero
Previous P.K. Yonge to Play The Villages in Football Regional Semifinal Tonight
Next Jaguars look to snap losing strak against the Steelers