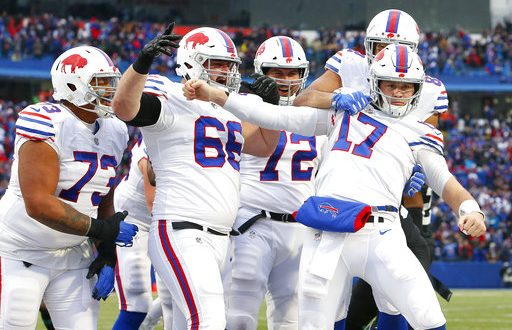 The Jacksonville Jaguars have been spiraling out of control for weeks now, and it hasn’t gotten any better. The Jaguars lost their seventh straight game on Sunday, falling to the Buffalo Bills 27-24.

Tempers and frustrations are boiling over for Jacksonville, a team with such high expectations to start the season. Now, they are left almost speechless.

Before the season, Jaguars defensive back Jalen Ramsey called Bills rookie quarterback Josh Allen “trash” in a GQ magazine article in August. The trash talking continued before the game kicked off with the outspoken corner pointing out each player on the Bills sideline who he believed was “trash.”

Ramsey had to eat his words early on when Buffalo stormed out to an early lead.

On the second drive of the game for the Bills, Allen led his team right down the field on five plays. The drive was capped off with a six-yard touchdown run by running back Isaiah McKenzie.

The next Bills drive had a similar result. In just three plays, Allen got his team back in the end zone. This time, it came on a 75-yard bomb pass from Allen to wide receiver Robert Foster. The Jaguars trailed 14-0.

Down 14 early in Sunday’s game, the Jaguars fought back, in more ways than one.

On the next Jaguars drive, the running back duo of Leonard Fournette and Carlos Hyde pounded away at the Bills defense. This Jacksonville drive took over six minutes off the clock and ended with a touchdown run for Fournette.

As the saying goes, “If it ain’t broke, don’t fix it.” This was the mindset for Jacksonville on their next drive. They stuck with the run and it paid off. Fournette found the end zone for the second time of the game, knotting the score up at 14 a piece.

The Jaguars thought they captured the lead when Bortles connected with receiver Donte Moncrief for the 30-yard touchdown. However, the replay showed Moncrief didn’t cross the plane and was ruled down at the one. After that play concluded, Fournette and Bills defensive end Shaq Lawson exchanged punches in a fight on the sideline. Players from both teams tried to separate the two. Both Fournette and Lawson were ejected from the game.

Then, the Jaguars had a 7-yard touchdown pass from Bortles to receiver Dede Westbrook brought back because of a holding call. Kicker Josh Lambo failed to convert a 42-yard field goal after the Jaguars failed to get the ball in the end zone.

Josh Allen gave the Bills the lead for good with his legs. To start the fourth quarter, Allen took it himself from 14-yards out and found the end zone. He celebrated with his best Conor McGregor impression. This gave Buffalo a 20-14 lead.

The teams would exchange pairs of punts. Then, Bortles was intercepted by Bills safety Jordan Poyer with 5:07 left. The Bills turned this take away into points with a 22-yard field goal from kicker Stephen Hauschka. This extended the Bills lead to 24-14.

The Jaguars would score a touchdown with Bortles finding Westbrook for a 13-yard touchdown connection with just 1:20 remaining.

However, the comeback fell short with the Jaguars failing to recover the onside kick.

After the game, Jalen Ramsey wasn’t as talkative as he was before the game.

Fournette took full responsibility for getting himself ejected from the game.

“I have to be a professional,” Fournette said. “I mean, you can’t have that.”

The team let this one go.

“We lost the game,” Fournette said. “We should’ve won this game hands down.”

The Jaguars hope to end this losing skid next week when they host the Indianapolis Colts. The Bills travel to Miami to take on the division rival Dolphins.