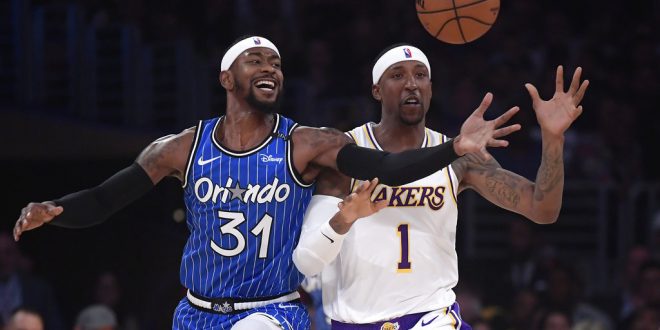 After losing two straight, the Magic were able to hold off a late fourth-quarter run to take down L.A. With the win, Orlando swept the season series against the Lakers. This is the second time in franchise history that the Magic have done this.

The Magic got off to a slow start, struggling to contain Lakers’ forward Kyle Kuzma. Kuzma scored 13 points in the first quarter, helping the Lakers jump out to a 29-19 lead after the first quarter.

However, in the second quarter, the Magic got hot.

They hit seven three-pointers in the period, outscoring the Lakers 32-23 in the quarter.

Vucevic led Orlando in the period, scoring 11 of his 15 first-half points in the second quarter. This included a fast-break dunk that swung the momentum to Orlando’s side.

After going down by ten points after the first quarter, the Magic cut the deficit to just one point going into the locker room for halftime.

However, the break did not slow the Orlando offense.

Gordon even pulled out one of his dunk contest-esque slams after a nice pass from Vucevic.

Vucevic had a big slam dunk on his own, posting up on Lebron James and spinning around him for another dunk.

After three-quarters of play, Orlando built a solid lead over L.A., 86-71.

However, the Lakers offense began to click again as the fourth quarter started. After cutting down the 15 point-deficit, the Lakers went on a 14-4 run to tie the game with under 3 minutes left.

Then, with under a minute left, Orlando’s Terrence Ross drove in for a layup to retake the lead 106-104.

After a Kentavious Caldwell-Pope missed three-pointer on the other end, the Magic again scored off an Aaron Gordon dunk to seal the win for the Magic.

Vucevic led both teams in scoring, putting up 31 points. He also pulled down 15 rebounds and recorded seven assists.

Terrence Ross proved to be a spark for Orlando. Along with his game-winning layup, Ross scored 16 points off the bench.

For the Lakers, Lebron James led the team, scoring 24 points along with four rebounds and seven assists.

The Magic will stay in California to take on the Golden State Warriors tonight.

The Lakers will travel to Denver to play the Nuggets on Tuesday.

Jonathan is a sports journalism student at the University of Florida. He enjoys videography, editing, photography, and writing.
Previous Buccaneers Defeat 49ers to End Losing Streak
Next Jaguars Drop Seventh Straight In 27-24 Loss to Bills