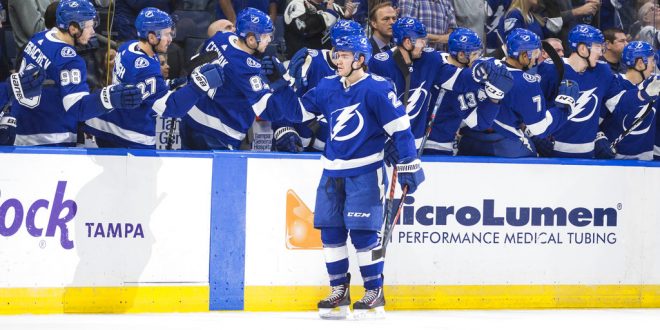 The Tampa Bay Lightning are on a roll.

A 5-2 victory over the New Jersey Devils on Sunday made it five wins out of the last six games for the Bolts. Louis Domingue came up big in goal for the Lightning, making 33 saves on 35 shots in one of his better performances of the season.

Sunday night’s win at Amalie Arena improved the Lightning’s tied-for-best league record to 17-6-1, the same mark as the Nashville Predators.

The Eastern Conference leaders did their damage early. They scored all five goals in the first two periods and scored four times within the first 12 minutes of action.

Alex Killorn got the scoring party started at 3:19 of the 1st period. Killorn received the puck after a good forecheck from Mathieu Joseph on Devils goaltender Cory Schneider. Killorn wrapped around the net and his shot from an awkward angle bounced in off of Schneider.

Goals in back to back games for Pointer!#NJDvsTBL | #GoBolts pic.twitter.com/keYOP1w1Ot

Less than three minutes later, the Lightning made it 3-0, and again Point was involved in the play. Nikita Kucherov dumped the puck into the offensive zone for Point to pick up off the wall. Point then slid a perfect pass across goal for Tyler Johnson to finish first-time.

New Jersey’s Stefan Noesen pulled a goal back just 24 seconds later, but Cedric Paquette put the lead back up to three at 11:25 of the first period with his fourth goal of the season.

Point rounded out his good day in the second period, getting his second goal and third point of the game just over eight minutes into the game to make it 5-1.

The Devils’ Jesper Bratt scored in the third to make it 5-2.