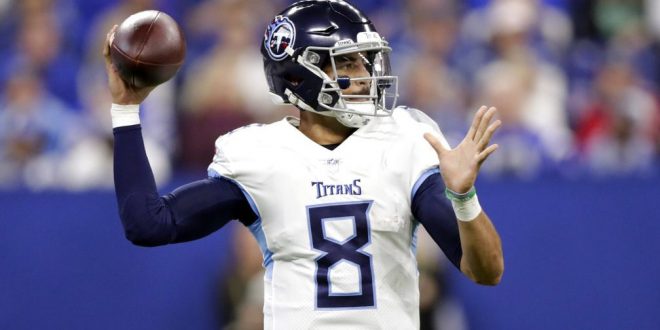 Tennessee Titans quarterback Marcus Mariota prepares to throw during the first half of an NFL football game against the Indianapolis Colts, Sunday, Nov. 18, 2018, in Indianapolis. (AP Photo/Michael Conroy)

Monday Night Football will see another division matchup between the Tennessee Titans and the Houston Texans at NRG Stadium.

The Titans hope to sweep the AFC South leaders and avoid falling below .500. The Texans look to extend their game-winning streak to eight.

There are a couple of things to watch going into tonight’s game.

The Texans Must Protect Deshaun Watson

The Texans’ offensive line hasn’t done a stellar job at protecting its quarterback. Watson, per CBS Sports, has been sacked on 9.6 percent of his dropbacks – one of the highest rates in the league.

Watson has also been pressured on nearly 41 percent of his pass attempts. And although the Titans rank low in the league when it comes to sacks and pressures, they were able to get to Watson four times when the team met in Week 2.

The last time Tennessee played in Houston, Watson put up five touchdowns. However, the young quarterback had nothing but positive things to say about Tennessee’s defense on Friday.

The 26-year-old All-Pro wide receiver “has been the most consistent, productive target for the Texans passing game during their seven-game winning streak,” per Texans Wire.

Hopkins is also one of the best in tight coverage.

Hopkins has had seven touchdowns and 72 receptions for 1,120 yards in 11 games against the Titans.

“He’s great, man. He can be physical; he can stem you up, and he can jump,” Titans’ cornerback Malcolm Butler said to ESPN about Hopkins. “The guy can catch the ball with one hand, two hands. There’s not much he can’t do. We have to compete on every snap. We can’t go to sleep on him. He has big-play ability, and we’ll have to adjust to him.”

The Titans defense will have to follow its own hashtag and #TitanUp to defend Hopkins.

Camille Woodhouse is a Sports and Media student at the University of Florida College of Journalism and Communications. In the past, she has covered the Atlanta Falcons and Florida Gators football for various sports news outlets. She is an Atlanta native and a fan of football.
@CJW_SportsRadio
Previous Heat Look To Get Hot At Home
Next Lightning Storm Past Devils 5-2