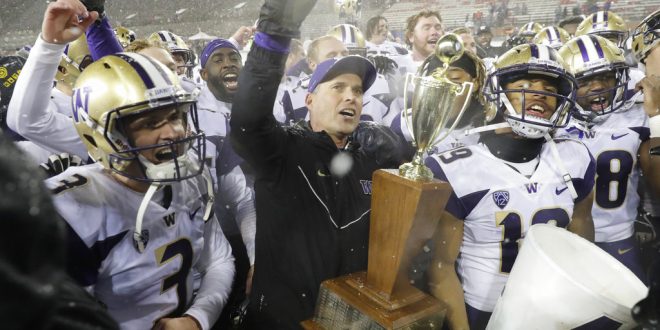 The No. 11 Washington Huskies are getting ready to battle for the Pac-12 Championship Friday night when they face the No. 17 Utah Utes. The Huskies were able to punch their ticket to the title game after beating their rival, Washington State, in last weekend’s Apple Cup. This will be the second meeting between the Huskies and Utes this season. Washington won in the regular season, 21-7, in Utah.

The Huskies were able to finish the regular season on a 3-game winning streak which has helped get them to the championship game. In their winning streak, the Huskies rushing attack has come alive.

Running back Myles Gaskin is running wild, as he’s reached at least 130 yards on the ground in the last three wins for the Huskies. Gaskin has also found the end zone five times in that span, including a 3-touchdown performance in the Apple Cup.

The Huskies and the Utes met earlier in the season, but lots of things have changed for both teams since Week 3. Utah also finished the regular season with a 9-3 record, going 6-3 in the Pac-12 to win the South division.

When the two teams met in September, Huntley was running the show for the Utes offense. That won’t be the case Friday as Huntley is still out with a broken collarbone, leaving freshman Jason Shelley in charge.

Shelley is coming off a 2-touchdown performance against BYU, scoring both through the air and on the ground. Shelley’s dual-threat ability will be key against Washington’s strong front-seven.

Kickoff between the No. 11 Washington and No. 17 Utah is set for 8 p.m ET from Levi’s Stadium in Santa Clara, California.

Previous Florida Women’s Hoops Falls to Northeastern 79-66, Drops to 0-6 this Season
Next Magic fall just short against the Trailblazers