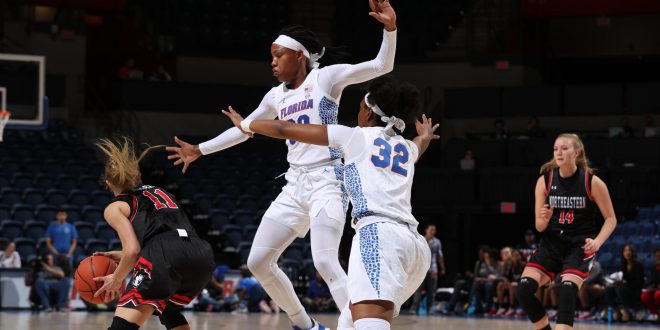 Florida Women’s Hoops Falls to Northeastern 79-66, Drops to 0-6 this Season

The Florida women’s basketball team dropped to 0-6 on the season after after losing 79-66 to the Northeastern Huskies on Wednesday in Gainesville. This loss marked Florida’s ninth straight loss dating back to their 2017-2018 season.

While Funda Nakkasoglu had 23 points, her team could not overcome their shooting woes. As a unit, the Gators shot 22 of-63 from the field while making 36 percent of their three-point attempts. Meanwhile, the Huskies drained half of their three-pointers and were fueled by a strong second half.

After the game, Florida head coach Cameron Newbauer recapped what led to his team losing.

“They play very well together as a team and share the ball,” Newbauer said of Northeastern. “Defensively was my biggest worry with them because they guard you. That’s why we shot 35 percent from the floor… they frustrate you.”

Delicia Washington came into Wednesday’s game as Florida’s second-leading scorer with 19.2 points per game. For Washington, her first half against Northeastern saw her struggle to be effective.

The junior guard had just three points on 1 of-11 shooting from the field and she was 0 for-3 from behind the arc. The bright side for Washington was that she made her presence known on the backboards by collecting five rebounds.

Luckily for Washington, her teammates were able to make up for her lack of offensive production. Outside of her 10 misses, the Gators were 10 of-22 in the first half, including 5 of-11 on their three-pointers.

Nakkasoglu, who returned to the game a few minutes after being carried off in the second quarter, was efficient in her shot selection.

#Gators Funda Nakkasoglu is being carried off the court after a tough fall . pic.twitter.com/ga1g9UzoBL

Florida’s leading scorer this season had eight points in the first 20 minutes. Kiara Smith also chipped in six points on two made three-pointers during this stretch.

Newbauer talked about a few of the reasons why Florida was successful coming out the gate.

“In the first half, we only scored on possessions where we had three or more passes,” Newbauer said. “We kept stressing that and we kept talking about that. We knew that in order to score against them, you had to make a move. You had to have multiple closeouts in order to get good looks. When we did that, we got good looks.”

As for what Northeastern did right, Jess Genco repeatedly gave the Gators fits. The senior had 12 points on 4 of 7 shooting from the three-point line while playing the whole half.

As a team, the Huskies shot 47 percent from behind the arc and shared the wealth with nine assists. Northeastern did struggle with their shooting in the second quarter and were out-rebounded 23-17 in the first half.

HALFTIME | Northeastern 33, Florida 31. Gators outscore the Huskies 18-14 in the second quarter to trim the gap heading into the break. Nakkasoglu pacing UF with 8 points. pic.twitter.com/g9y5Fvzz1i

Unable to match the Huskies’ offense

Florida’s second half numbers were very similar to what they recorded in the first half. The group made one more three-pointer, had a similar percentage behind the arc and shot slightly better from the floor. The biggest difference is they had nine less rebounds and nine more personal fouls.

Although the two halves were similar statistically, Newbauer noticed a lack of ball movement down the stretch.

“I’m sure when we watch the film, we’ll see that in the second half we probably had more of those possessions where we didn’t share the ball like we should,” Newbauer said. “That’s tough because we’re not good enough as individual players to create our own shots for 40 minutes against a really good defensive team like that.”

Northeastern, on the other hand, completely flipped the script offensively in the final two quarters. Led by Genco, the Huskies scored 18 of their 46 second-half points off of three-pointers. The team was 16 of 27 from the field and took control of the glass with 21 boards.

Wednesday’s loss against Northeastern was the third time Florida has allowed at least 50 percent shooting from both the field and the three-point line this season.

Paige Robinson provided some solid minutes for Florida against Northeastern. The transfer from Midland (Texas) College had 10 rebounds (7 offensive) after fouling out the last two games.

Robinson talked about her adjustment to the Gators and the direction of the team.

“Being here, coming from JUCO, it was a big difference,” Robinson said. “I think the coaches have been really patient with me in finding my feet here. I feel like we’re getting better as team.”

Florida has demonstrated in their six losses that they are capable of winning games. They have held a first quarter lead in all but two match ups and have kept their games competitive into the final frame of play.

While they have yet to put it all together for a full 40 minutes, Newbauer wants his players to stay motivated.

“This isn’t fun,” Newbauer said of the Gators’ start to the season. “But we have to stick with the process of fighting and sticking together and learning what that really means and looks like.”

What’s next for the Gators

Florida will be hosting Texas Tech on Sunday for the Big 12/SEC Challenge. This will be the Gators’ second match up of their four-game home stand that began against Northeastern.