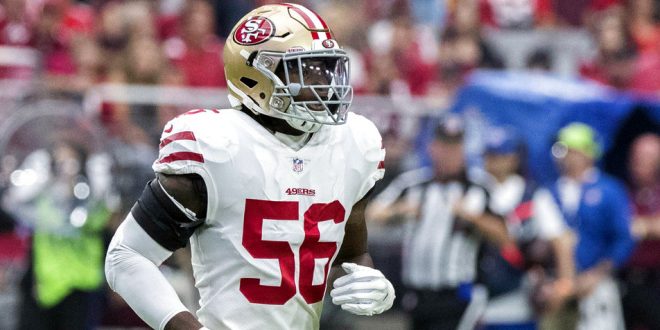 FILE - In this Oct. 28, 2018, file photo, San Francisco 49ers' Reuben Foster (56) jogs on the field during the first half of an NFL football game against the Arizona Cardinals in Glendale, Ariz. The Washington Redskins claimed Foster off waivers on Tuesday, Nov. 27, 2018, after the 49ers released the linebacker following a domestic violence arrest. The team says conversations with former Alabama teammates led to the decision to claim Foster. (AP Photo/Darryl Webb, File)

Why did the Washington Redskins claim Reuben Foster?

The Washington Redskins claimed the troubled defenseman on Tuesday, three days after his arrest.

The former Alabama linebacker was arrested Saturday night on charges of domestic violence at the Grand Hyatt Hotel in Tampa. The incident occurred just hours before the San Francisco 49ers contest against the Tampa Bay Buccaneers.

As a result, the 49ers cut ties with one of their first-round picks from the 2017 NFL Draft on Sunday morning.

This isn’t the first time Foster has been in trouble with the law, specifically for domestic violence. The same woman from Saturday accused Foster of domestic violence back in February, leading to a trio of felony charges against him.

Those charges, however, were dropped after his accuser recanted her statement during a preliminary hearing.

Now, according to numerous reports, the victim plans to fully cooperate and pursue charges against Foster after this past weekend’s alleged incident.

Despite all of the recent developments, the Redskins organization decided to take a chance on the young linebacker. Foster won’t be allowed to participate in practices or games after being placed on the NFL’s commissioner exempt list. However, he is still allowed to attend meetings.

Head coach Jay Gruden said on Wednesday there is no guarantee Foster will ever play in a Redskins uniform as the team, and Foster, await the results of the legal process. He also called Foster’s signing a “team decision” as the Redskins prepare for a division matchup against the Philadelphia Eagles.

The move surprised fans across the country, and even caught Foster’s former coach off guard.

“I was a little surprised,” 49ers head coach Kyle Shanahan said. “Not the team in particular, but that someone did. But someone did.”

But the move won’t be a distraction to the team, Gruden said on Wednesday. Gruden also said that, even though Foster has some former Alabama teammates in Washington, his guys understand what happened and are staying on track.

With the situation still in the early stages, Foster still has a long way to go in the legal process.

If, or when, Foster gets back on the field, he’ll look to restart a career that didn’t have the best start. In 16 games, Foster has collected 101 total tackles, seven of them for losses. The linebacker has yet to obtain a sack and hasn’t forced a fumble.