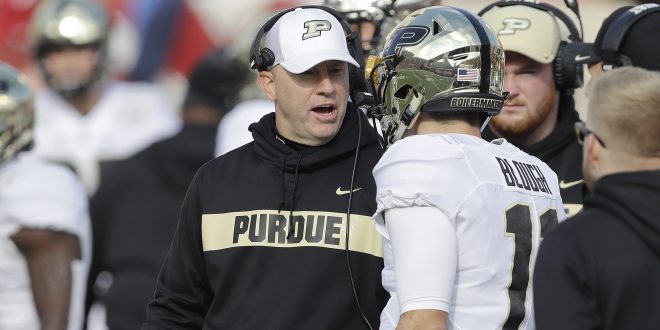 Impact of Jeff Brohm’s decision to stay at Purdue

Louisville’s efforts to secure Jeff Brohm for a head coaching job came to an abrupt halt on Wednesday. Brohm played quarterback at Louisville from 1989-93 and was an assistant coach at the school from 2003-08.  But the Purdue head coach turned down his alma mater, opting to return to the Boilermakers next season.

What this means for Louisville

Brohm’s decision to turn down the coaching job with the Cardinals seems to be the dagger in their season.

The program plummeted after the departure of former Heisman trophy winner Lamar Jackson, going from a from an 8-5 record last year to a two-win 2018 campaign.

Bringing on Brohm after Bobby Petrino was fired during the season seemed like the perfect choice for the Cardinals.

But they’ll have to continue their quest for a someone to turn the program around with Brohm’s decision to remain in West Lafayette.

According to 247Sports, Louisville athletic director Vince Tyra released a statement after speaking with Brohm about the future of the Cardinals’ football program. And Tyra said it was clear that Brohm’s “heart and mind were still with fulfilling his commitment to Purdue.”

What this means for Purdue

This is an obvious a win for Purdue football. The Boilermakers get the comfort of keeping a coach and staff that helped the team to a 6-6 record this season after they’d won five total games in the two seasons before his arrival.

Brohm has led the Boilermakers to a 13-12 record since joining the program for the 2017 season.

After several agonizing days, Coach @JeffBrohm has decided to stay at Purdue instead of becoming the next football coach at the University of Louisville.

Brohm stated in a release that his choice to turn down the job at Louisville has been “a very difficult and emotional decision for me and my family.”

Trinity High School canceled Thursday’s classes after receiving threats related to Brohm’s decision to stay at Purdue, according to a release on the school’s website.

Brohm is an alum of Trinity High School who played quarterback there before playing for Louisville.

The high school made the announcement Wednesday not too long after Brohm’s decision was announced. And according to a report by WDRB, St. Matthews police said someone made the threat on Twitter to burn down the school because of Brohm’s rejection of Louisville.

The suspect who made threats against Jeff Brohm's old high school on Wednesday night could be charged with terroristic threatening by the FBI https://t.co/sbbX51e0pt

The school’s release says police are investigating the threats.