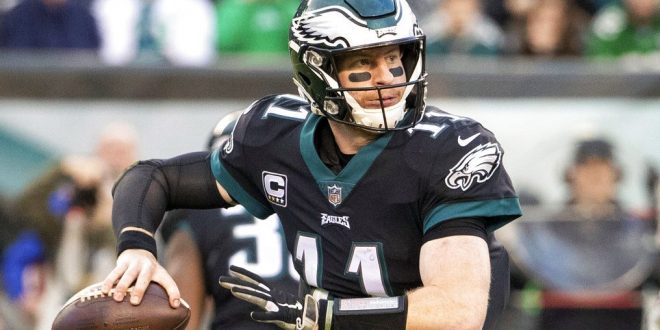 FILE - In this Nov. 25, 2018, file photo, Philadelphia Eagles quarterback Carson Wentz looks to pass during the second half of the NFL football game against the New York Giants in Philadelphia. Wentz put all his skills on display against the Washington Redskins last season. (AP Photo/Chris Szagola, File)

Monday Night Football kicks off as the Philadelphia Eagles host the Washington Redskins at home in an NFC East rivalry face-off.

The Redskins hope to avoid falling to .500 on the season, while the Eagles seek to improve to .500.

There a couple things Philadelphia needs to consider going into Monday’s game.

Washington is Comfortable with Colt McCoy

Despite him throwing three picks in his first start against the Dallas Cowboys on Thanksgiving, the Redskins are comfortable with their backup quarterback. He can play more aggressively and get the ball out quickly.

“He’s got a quick release, only thing he doesn’t have is, he hasn’t played as much [as Smith],” former NFL quarterback Chris Simms told NBC Sports. “But I do think this long week will help him out a lot. And I expect Colt McCoy to be pretty consistent and good on Monday night.”

McCoy knows he needs to improve after his less-than-ideal performance in the loss to the Cowboys.

The Redskins’ Success Depends on the Lines

Lately, however, both lines have been struggling due to the growing list of injured players on Washington’s roster.

The players are aware that they haven’t been playing to the best of their ability and are working to get back being one of best in the league at the line of scrimmage.

“I feel like we have to get back to our roots,” said Washington’s defensive end Jonathan Allen. “Be more consistent and do the little things. We kind of got away from the little things, so that’s something we’re definitely trying to focus on this week in practice.”

Camille Woodhouse is a Sports and Media student at the University of Florida College of Journalism and Communications. In the past, she has covered the Atlanta Falcons and Florida Gators football for various sports news outlets. She is an Atlanta native and a fan of football.
@CJW_SportsRadio
Previous Former Florida Head Coach Jim McElwain Hired to Lead Central Michigan
Next No. 5 Georgia Heads to Sugar Bowl to Face No. 15 Texas