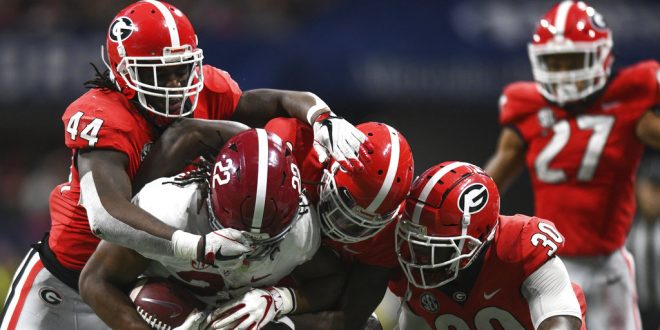 No. 5 Georgia Heads to Sugar Bowl to Face No. 15 Texas

It’s not the College Football Playoff, but the Sugar Bowl won’t be a bad consolation for Georgia.

The No. 5 Georgia Bulldogs will be one of three SEC teams participating in one of this season’s New Year’s Six bowls. Kirby Smart’s team will head to New Orleans to take on No. 15 Texas in the Allstate Sugar Bowl on January 1.

The other two SEC teams are LSU (Fiesta Bowl vs. UCF) and Florida (Peach Bowl vs. Michigan).

From Playoff to New Year’s Six

Georgia had hoped to instead be in the playoff, but Saturday’s loss to Alabama in the SEC Championship Game changed that. The loss bumped them down from No. 4 to No. 5, with Oklahoma jumping into the top four after their Big 12 Championship victory over Texas.

The Bulldogs playoff chances took a big hit when they lost to LSU 36-16. Their loss to Alabama made it difficult for the committee to place an 11-2 team that didn’t win its conference over a 12-1 Oklahoma team. A team that won it’s conference and avenged it’s only loss, by three points to Texas, in the conference championship game.

Because of conference tie-in rules, the SEC’s highest-ranked non-playoff team gets an automatic bid to the Sugar Bowl, thus sending Georgia to New Orleans for the first time since 2008.

Georgia’s trip to the Sugar Bowl extends their bowl streak to 22 seasons. That’s the second-longest active streak in the country, only behind Virginia Tech’s 26 consecutive seasons.

Their opponent this year, Texas, enters as big 11.5-point underdogs according to Vegas. The Longhorns are coming off a loss to Oklahoma in the Big 12 Championship Game, their fourth loss in a season that included losses to Maryland, Oklahoma State, and West Virginia.

Tom Herman’s team can go a long way with proving that Texas is back though with a win over the Bulldogs. A 10-win season would be a big step forward in Austin, and marquee wins over Oklahoma in the Red River Rivalry and Georgia in a bowl game would be a big selling point for the Longhorns.

This will be the first meeting between the two teams since 1984 when Georgia upset Texas 10-9 in the Cotton Bowl.