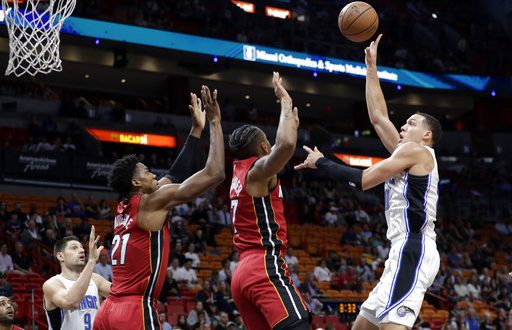 The Orlando Magic picked up their 12th win of the season at the expense of the Miami Heat by a score of 105-90 on Tuesday night.

Aaron Gordon had a huge performance in Miami. He recorded 20 points, 13 rebounds, five assists, a steal, and a block. He went 3 for 3 from beyond the arc and was a +28 on the court. This was the second time that Gordon has decimated the Heat, as he dropped 26 points and 16 rebounds in the season opener when the Magic hosted Miami. On the season, he’s averaging 16.3 points per game, 7.5 rebounds, and 2.7 assists. Gordon wasn’t the only reason Orlando took this win, however. Center Nikola Vucevic contributed with 19 points, 10 rebounds, and a team-leading +31 rating on the court. Terrence Ross added 19 points and D.J. Augustin chipped in with an 11 point, five assist performance.

The Magic had been struggling as of late since their 7-3 hot start. They dropped two in a row, won one game, and then lost another two. But after defeating Pheonix on Friday and now Miami on Tuesday, the Magic might be back on track. Orlando now sits at 12-12 and at the seventh seed in the Eastern Conference. However, their upcoming schedule will provide a true test of this team’s capabilities. Orlando’s next three games are against winning teams in Denver, Indiana, and Dallas.

In the first, second, and fourth quarter, the Heat actually outscored the Magic by three points. In that third quarter, all went wrong for Miami. The Magic outscored the Heat 30-12 in the quarter. The 12-point quarter was Miami’s lowest scoring quarter of the season as they shot just 5 of 21 from the floor as they saw a four point lead turn into a 14 point deficit. Third-quarter struggles have plagued the team all year long. This game was just another victim to Miami’s inconsistency.

Not So Hot in Miami

The Heat struggled mightily in several areas against the Magic. They shot just 41.8% from the field and hit 12 of their 35 threes. They went just 2 of 5 from the free-throw line. Miami had 15 turnovers, and once again turned in a wildly inconsistent performance. These aren’t issues just from this game, however. Free throws, turnovers, attacking the basket, and other problems have led to the Heat’s poor start. Tuesday’s loss drops the Heat to 9-14 on the season. They have the seventh worst record in the league so far this season. It likely won’t get any easier as the team is about to embark on a six game road trip in which they will face the Suns, Clippers, Lakers, Jazz, Grizzlies, and Pelicans all on the road.

.@MiamiHEAT coach Erik Spoelstra breaks down the #ORLvsMIA loss and says he wants players to "funnel" their frustration and energy back into the team.#HEATCulture #NBA pic.twitter.com/gHHyLfH5IC