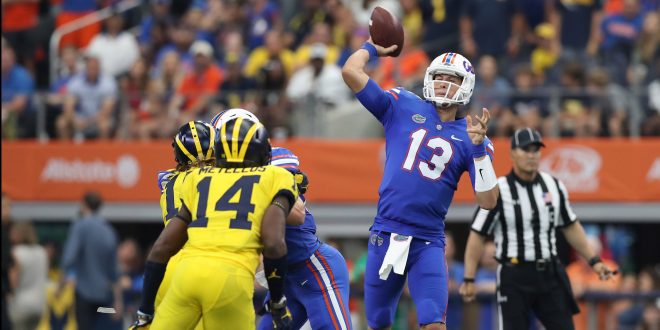 A top ten bowl game match-up is set for December 29th. The No. 10 Florida Gators will face the No. 7 Michigan Wolverines in the Chick-Fil-A Peach Bowl. The game is set for a noon kickoff at Mercedes-Benz Stadium in Atlanta.

This is no unfamiliar match-up for these two teams, as the teams will be playing for the third time in the past three seasons. The Wolverines defeated the Gators in the 2017 season opener 33-17 and also won the 2016 Citrus Bowl 41-7.

However, a new addition for the Gators since these losses: Head Coach Dan Mullen.

The Peach Bowl match-up will be the fifth time these two teams will be playing each other. The Wolverines sit 4-0 on the Gators.

Even during the Tim Tebow era, the Gators lost 41-35 in the 2008 Capital One Bowl. Tebow threw for 154 yards and had four touchdowns. But, after four straight incompletions on their last drive, it sealed the loss for the Gators.

Florida is heading into their third peach bowl and last game of the season ranked in the top ten for the first time since 2012. This past season Dan Mullen took over a 4-7 team and led them to a 9-3 winning record. They are now on to face the No. 1 scoring defense in the country. A test for quarterback Feleipe Franks and the rest of his offense. Head coach Dan Mullen is in full prep for the game.

“I got lucky last week cause I had to get on a plane before they made the announcement and I had a laptop that had about six different teams on them,” Mullen said. “Thankfully, Michigan happened to be one of them so I was able to start studying them.”

The Wolverines are coming off a tough loss against rival Ohio State which put them out of the running for the College Football Playoff. They head into the Bowl Game hoping to finish the season on a positive note after allowing their rival to put up 62 points.