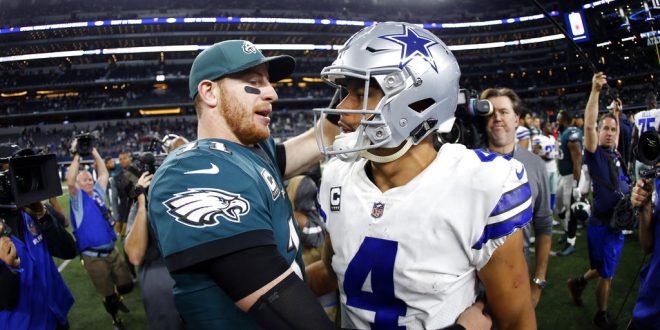 FILE - In this Nov. 19, 2017, file photo, Philadelphia Eagles' Carson Wentz, left, and Dallas Cowboys' Dak Prescott, right, greet each other after their NFL football game, in Arlington, Texas. Prescott and the Cowboys saved their season with a win in Philadelphia a month ago. Now Carson Wentz and the defending champion Eagles are trying to do the same in Texas against first-place Dallas on Sunday. (AP Photo/Ron Jenkins, File)

The Philadelphia Eagles, who are 6-6, are on the road this weekend in a divisional matchup against the  Dallas Cowboys (7-5).

As the season is slowly winding down and the playoffs battles are getting down to the wire, this Eagles and Cowboys matchup is a very anticipated one for the season. The last time these two teams met the Cowboys defeated the Eagles 27-20 and are looking for payback.

The Eagles, who are the defending Super Bowl champions, look to keep that same momentum going into this game and the rest of the season. With their season up for grabs, they have to fight harder.

They are currently sitting 2nd in the NFC East directly under the Cowboys.

The Eagles are currently 13th in passing yards, 23rd in rushing yards, and 17th in total yards per game.

Philadelphia will most likely focus on their passing game and rely on quarterback Carson Wentz that’s been playing a majority of the season. The Eagles are still fighting for their playoff spot.

Their offense has been making changes throughout the season.

Philadelphia is gaining back some momentum to their offense with WR Darren Sproles back in the lineup. If the Eagles are able to pull out this win, both of these teams will be tied in overall record.

The Dallas Cowboys sit number one in the NFC East. The Cowboys have won their last 4 games, which makes them the leaders of the NFC East, hosting the Eagles this Sunday.

The Cowboys defense is more of the dominant coming into this game. The Cowboys have made major changes to their organization firing their offensive line coach, which changed their offense for the better.

The Cowboys sit 26th in passing yards, 6th in Rushing yards, and 24th in total yards per game.

Their game plan going into this matchup is a running offense being that they are 6th in rushing yards in the NFL.

If the Cowboys are able to pull this win out, they would be 2-0 on the Eagles this season.

How can the #DallasCowboys stop Carson Wentz?

The Cowboys Insider crew gives their say on the Eagles’ QB. #PHIvsDAL pic.twitter.com/jTZq35UMoh

Tune in Sunday afternoon to watch these two top contending teams battle it out. Kickoff is set for 4:25 p.m.