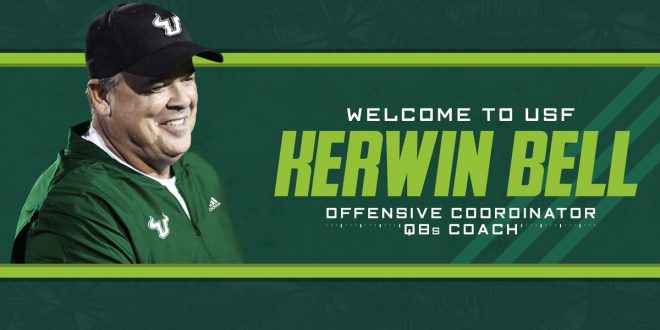 First he was a quarterback… first for the Florida Gators and then in the NFL.

Now, after being in the game since 1983, Kerwin Bell is the offensive coordinator at the University of South Florida.

How Bell Got Here

Despite Bell’s long life in football, his success has always been a bit of a slow burn. As a player, he walked on at UF only to take an immediate redshirt. He transformed that into becoming the SEC Player of the Year as a senior. As a coach, it took almost two decades before making the jump to Division I…but he did things his way.

Bell is perfectly fine with the slow pace because to him, it means that he’s perfecting his craft. According to Bell, many offensive coordinators ride the coattails of the head coach instead of learning their own systems.

Besides that, Bell is not the only person who thinks he’s doing things the right way. Former Florida defensive coordinator and current USF head coach Charlie Strong seems to agree. In fact, Bell says Strong had a pretty clear image in mind when looking to hire an offensive coordinator.

What He’s Planning to Do

Bell continues to prove his success as a coach at every level. He has his own style of offense and it comes from a variety of sources.  He talks where his offensive philosophy came from.

He says one of the first things he wanted to do in running an offense was to play faster, but to do that, Bell says he had to simplify some things.

In short, Bell looks to understand his players and get them in a system that meshes with the coaching staff; the offense he inherits features some pretty impressive players. Besides the guys who accepted scholarships from the Bulls out of high school, the program took in some high-caliber transfers to round out one of the AAC’s best teams.

For example, quarterback Blake Barnett graduated high school as the best pro-style QB according to 247Sports. After never panning out at Alabama or Arizona State, Barnett took to South Florida to finish out his college career. Last season, Barnett threw for more than 3,000 yards through 10 games.

One of the backs Bell refers to is former Gator Jordan Cronkrite, who played his first season for the Bulls in 2018.

Planning for the Future

Although USF closed out the 2018-2019 season with a six-game skid, a new season is on the horizon. Redshirt sophomore quarterback Chris Oladokun announced his transfer to Samford, leaving more room for Bell to develop Barnett as the starter at the position.

The Bulls begin the 2019-2020 season with a challenge… hosting the Wisconsin Badgers. Is Kerwin Bell up to the test? Only time will tell. But, the new offensive coordinator’s years of experience should serve him — and the USF Bulls — well for years to come.

Previous Saints March Past Eagles For Place in NFC Championship Game
Next A Change for the Jets: New HC Adam Gase