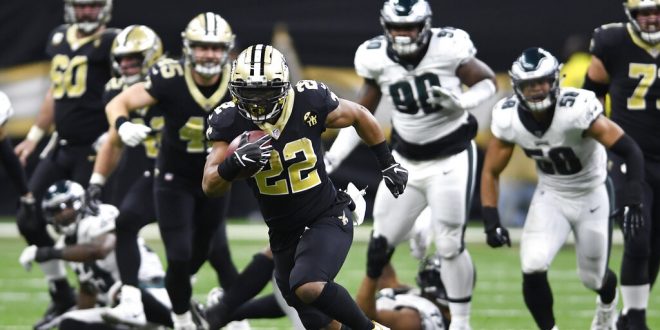 Saints March Past Eagles For Place in NFC Championship Game

The New Orleans Saints breezed through the regular season to a 13-3 record and the NFC’s top seed.

Their trip to the NFC Championship Game was not as easy.

The Saints came back from a 14 point deficit to beat the Philadelphia Eagles 20-14 in Sunday’s NFC Divisional Round. The win sets up a date in the Superdome with the Los Angeles Rams next Sunday for a trip to Super Bowl LIII.

A pick from Marshon Lattimore late in the 4th sealed the game after Drew Brees (301 pass yards, 2 TDs) and Michael Thomas (12 rec., 171 yards, TD) led the Saints comeback over the defending champions.

They didn’t get going until the second quarter though, as the Eagles pounced to a quick 14-0 lead.

Philly’s defense forced a turnover on the first play from scrimmage. Brees stepped back and launched a deep bomb over the middle to Ted Ginn Jr. Crevon LeBlanc made a great leaping effort on the underthrown ball and gave the Eagles the ball right away.

From there, Nick Foles went to work.

The Saints punted on the ensuing drive, and the Eagles made it 14-0 before the end of the first quarter. Foles carried it in from a yard out to cap a 10 play-75 yard drive.

From there though, it was all New Orleans the rest of the way.

The Saints’ defense stepped up, limiting Philadelphia to 99 yards of offense the rest of the way.

Meanwhile, Brees and Thomas turned up the heat, with some help from Taysom Hill.

Taysom Hill barrels his way to a #Saints first down on 4th-and-1!#PHIvsNO pic.twitter.com/4XPt8cFbgK

A touchdown pass to Keith Kirkwood on fourth down and a field goal from Will Lutz made it 14-10 at halftime.

The real momentum shift came at the beginning of the second half. The Eagles went three-and-out to start the half, and the Saints took advantage.

They went on an absurdly long 18-play, 92-yard drive that chewed over 11 minutes and resulted in the lead on a 2-yard touchdown pass from Brees to Thomas.

New Orleans tacked on another field goal, and had a chance to ice the game late in the 4th quarter, but Lutz missed a 52-yard field goal that kept it at 20-14 with 3:03.

Foles drove the Eagles down into New Orleans territory and seemed to be on the verge of more playoff magic.

It wasn’t meant to be though. A pass to Alshon Jeffery slipped right through his hands and into the hands of Lattimore for the game sealing pick.