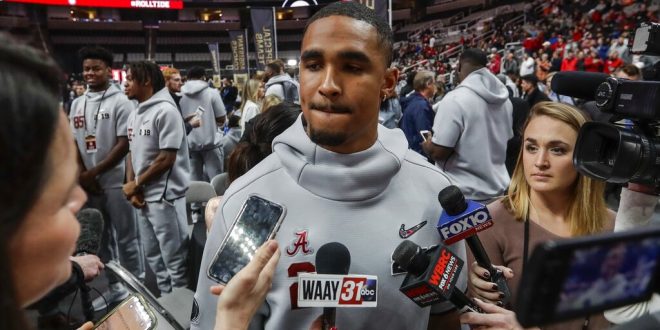 Now that college football’s offseason is fully underway, transfers and the NCAA transfer portal have taken over. An abundant amount of players have already announced their transfer or have placed their name within the portal, especially quarterbacks.

So far, according to 247sports.com, here’s the entire quarterback list:

Players in the portal, but undecided:

Quarterback transfers in college football are off the rails. Need proof? Five of the top six dual-threat QBs in the 2015 recruiting class have moved on to other schools https://t.co/LWQ8uWbFUj pic.twitter.com/oJKnPhIjuD

The most notable recent transfers include:

Jalen Hurts announced this afternoon that he is transferring from Alabama to Oklahoma. It’s a smart move for Hurts since Oklahoma has produced back-to-back Heisman Trophy winning quarterbacks.

At Alabama, Hurts accumulated 71 touchdowns. He threw for 5,626 yards, 48 touchdowns, 12 interceptions and rushed for 1,976 yards. Hurts was benched during the National Championship in Jan. 2018, in which Tua Tagovailoa came in and won the championship against Georgia. Tua then went on the win the starting quarterback position for the following season.

Florida State Seminoles backup quarterback James Blackman announced on January 16, 2019 that he has placed his name in the transfer portal.

Blackman was a three-star QB coming out of high school. He got his start as a true freshman where he started 12 games in 2017 following Deondre Francois’ injury. During the 2017 season, he threw for 2,230 yards, 19 touchdowns and 11 interceptions. He also started one game this season, in which he threw for 431 yards and 4 touchdowns.

However, it’s not certain that Blackman will transfer from FSU, but by putting his name on the portal, he can explore his options.

Early this morning, the former redshirt freshman quarterback at Ohio State announced his transfer to the University of Miami.

Despite his lack of playing time at Ohio State, Martell was a 4-star prospect coming out of high school. He was also ranked the No. 2 dual-threat quarterback in the 2017 recruiting class.

Martell sat behind Ohio State’s starting quarterback Dwayne Haskins this season as the Buckeyes won the Big Ten Championship and the Rose Bowl. Haskins was a Heisman Trophy finalist and ended up declaring for this years NFL draft. This would have been the perfect year for Martell to take over Ohio State; however, former Georgia quarterback Justin Fields announced his transfer to Ohio State for the 2019 season.

With this transfer, Martell might have to sit out a year. Martell is currently trying to get a waiver from the NCAA that would make him immediately eligible for the 2019 season.

Wimbush started as quarterback for the first three games of Notre Dame’s 2018 season. The Irish then benched him and put in Ian Book. Wimbush saw the field again when he went in for Book, who got injured, in Notre Dame’s matchup against Florida State. He led Notre Dame to a 42-13 victory.

He ended up playing in six games during the 2018 season for 719 passing yards, four touchdowns and six touchdowns. With Ian Book remaining as the starting QB for Notre Dame, Wimbush decided to take his talents to Orlando.

Wimbush is transferring to UCF as a graduate student and will be immediately eligible.

Sydney is a senior studying telecommunications with a specialization in sports media at the University of Florida. She is a multimedia sports reporter for ESPN 98.1 FM/850 AM WRUF and WUFT-TV.
Previous Vanderbilt searches for its first conference win against the Gamecocks
Next Orlando Magic Force Overtime, But Lose to Detroit Pistons 120-115