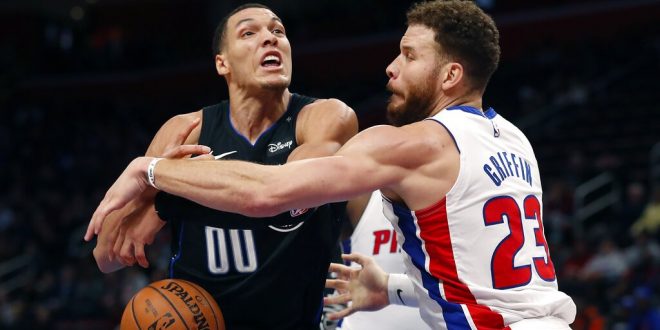 Little Caesars Arena was not big enough for both the Orlando Magic (19-25) and the Detroit Pistons (19-24) Wednesday night. Orlando forced overtime after being down double-digits on the road, holding Detroit to only 19 fourth-quarter points.

However, the rally came short, as the Magic lost 120-115 and Steve Clifford’s squad sits at 10th in the Eastern Conference. All-star power forward Blake Griffin led the way with 30 points, five assists and four rebounds for Detroit, while Terrence Ross and Nikola Vučević combined for 48 points for the away team.

.@TFlight31 getting it done on both ends of the floor. pic.twitter.com/xsRGVKiE2g

Basketball is the Game, Inconsistency is the Name

Cold like the White Walker-winter in Game of Thrones, the Orlando Magic fell to 0-3 in overtime this season. The Magic led 109-107 within the final minute, appearing to be finalizing a three-game winning streak. Nonetheless, Detroit forced overtime with two crucial offensive rebounds and a put-back to tie the game with 32.9 seconds left.

Execution became the worst enemy of the Magic, with Vučević missing a chance to win in regulation and tie it in overtime. Vučević, who’s averaging 20.2 points and 11.9 rebounds in 2018-19, was disappointed in the outcome.

“I made a couple on similar plays tonight. That was the play that we drew up and the shot we wanted, but I didn’t make it. I had opportunities in overtime as well and missed those, so I’ve got to come through next time. Those are my shots – even the hook shot (in overtime) with Reggie Bullock on me, I get it right where I wanted it, but it was short. I need to make those, and the team relies on me to make those.’’

Ross scored all six points for Orlando in overtime, after hitting a pair of threes. Detroit pulled through, despite leading only 117-115 with 42.5 seconds left. Orlando has now lost 20 of 26 games in Detroit overall.

The Detroit Pistons allowed the Magic to shoot 67.5 percent in the first half and 50 percent overall, yet found a way to score and come out on top. Despite going down, Pistons’ head coach Dwane Casey said his team’s mentality leads to success.

When you build that resiliency, that attitude, that sense of purpose, good things happen.

Another Southeast division team is in the Motor City tomorrow night, as the Pistons host the Miami Heat (21-21) at 7 p.m.

Orlando is back at the Amway Center tomorrow to face the Brooklyn Nets (23-23), a team that similarly beat both the Boston Celtics and Houston Rockets over the last couple of days. The seventh-seeded team will play the Magic three times in less than a month and beat Orlando three of four times in the 2017-18 season.