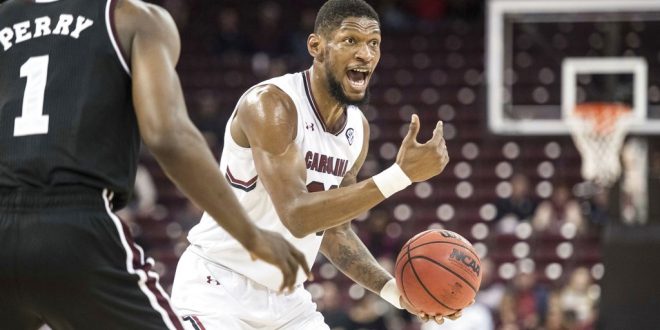 Vanderbilt searches for its first conference win against the Gamecocks

The Commodores will try to turn around their conference woes against the South Carolina Gamecocks, who are undefeated in conference play (3-0). Both team’s seasons have been on opposite tracks. The Gamecocks struggled in non-conference play, before hitting stride to start conference play.

In their last time out, the Commodores played the Kentucky Wildcats tight, but ended up losing by nine points. As for the Gamecocks, they’re coming off a 10-point win over the Missouri Tigers.

Entering conference play, the Commodores were riding a 9-3 record, which included a win over then No. 18 Arizona State. However, the strength of the SEC may have caught up to the young Commodores. Vanderbilt is 0-3 after losing to Ole Miss, whose considered a surprise team by many.

The Commodores are a young, athletic team that plays with great pace. Vanderbilt’s playing style has caught the eye of Gamecocks head coach Frank Martin.

It was a rough non-conference schedule for the Gamecocks, but they’ve turned the page in SEC play. The Gamecocks have started conference play 3-0, including a win over ranked Mississippi State.

The Gamecocks have been led by the play of senior Chris Silva. Silva is the team’s leading scorer with 12.9 points a game. Also, Silva averages 6.9 rebounds per game and 2.1 blocks.

During their current three-game winning streak, the Gamecocks are averaging 81 points per game. That’s the most a Frank Martin led team has averaged over a three-game span in conference play during his time as Gamecocks head coach.

Silva and the Gamecocks seem to clicking on all cylinders to start conference play. They’re one of three team’s tied for first in the SEC, as they look for their fourth straight in SEC play.

The Commodores and Gamecocks will take the court both trending in different directions. One team seeks their first conference win and the other looks to stay unbeaten in SEC play. Tip-off from Nashville is set for 7 p.m.

Trade Deadline Recap in the NBA

Trade deadline day in the NBA has come and gone, and now several teams are …