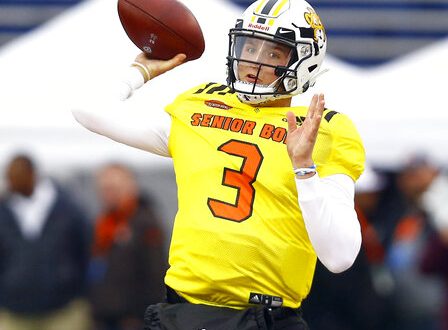 Under the center for Missouri, quarterback Drew Lock has impressed many. Ripping apart SEC defenses, such as Florida, like it was nothing. His potential has garnered the interest from NFL scouts.

Lock hopes to show that his skills will translate to the NFL during Senior Bowl week with multiple teams intrigued in learning more about the Missouri signal caller.

Mizzou QB Drew Lock on his message to NFL teams at the @seniorbowl and more on @nflnetwork pic.twitter.com/ySzsv7Kbx7

In his senior year, Lock put up the numbers necessary to be mentioned as one of the top quarterbacks in this year’s draft class. In 2018, Lock’s stat line is 62.9 completion percentage while throwing for 3,498 yards and 28 touchdowns.

These numbers led to an invitation to take part in the Senior Bowl. This serves as an opportunity for the top draft prospects to improve their stocks.

On Tuesday, Lock’s performance was mixed. According to CBS Sports, Lock was criticized for hanging on to the ball for too long. However, he made up for it with some impressive deep ball throws.

Even though some of these throws were dropped by the receivers, Lock still showcased his cannon arm and accuracy.

In the movie “Draft Day,” actor Kevin Costner plays the general manager for the Cleveland Browns. When going through the highly touted fictional quarterback Bo Calahan, he tries to find out the most obscure information to see if he isn’t the perfect guy everyone made him out to be.

The Missouri quarterback wasn’t interviewed by Kevin Costner at the Senior Bowl. However, maybe someone tried to channel Costner’s character.

Lock was asked by an unnamed team about possible academic cheating in ninth grade.

Bit of clarification here…
Club only knew of a disciplinary snag of some kind from 9th grade and asked Lock what it was. Lock disclosed the details. https://t.co/hnqrEhKAVQ

Lock and other top prospects have the ability to sit down with team representatives. This allows teams to get to know these prospects on a personal level.

One of the teams who has already interviewed Lock is the Miami Dolphins.

Lock spoke with ten to twelve Dolphins representatives, including former Dolphins quarterback Dan Marino. The Dolphins hold the eleventh pick in April’s draft and are in search of a new quarterback. Many expect the team to part ways with current quarterback Ryan Tannehill.

On Sunday, Lock will be under the center at the Senior Bowl in Mobile, Alabama. Kickoff on Saturday is at 1:30 p.m.