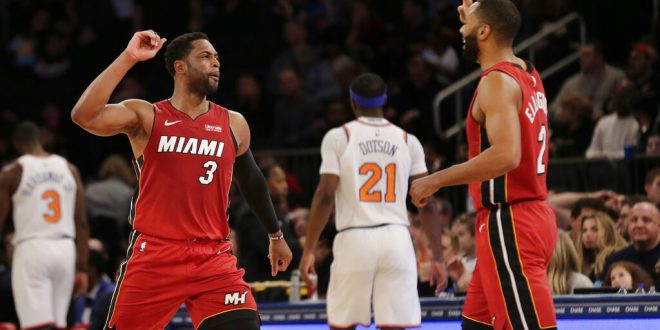 Second Half Turnaround Leads Heat Past Knicks at MSG

The first half wasn’t pretty, but a strong third quarter comeback led the Heat past the Knicks 106-97 at Madison Square Garden on Sunday night.

Down by six at halftime, Miami outscored New York 29-12 in the third quarter to take an 11-point lead heading into the final frame.

Nine different players played at least 17 minutes for the Heat, with seven of them scoring in double figures. Wayne Ellington paced all Miami scorers with 19 points.

Hassan Whiteside and Dwyane Wade each pitched in with double-doubles. Whiteside put up 13 points and 16 rebounds to go along with three blocks, while Wade served as facilitator with 15 points and 10 assists.

The win, which pushes the Heat back to .500 at 24-24, came off the back of Miami’s defense and three-point shooting.

Miami held New York to 42.9 % shooting from the field and just 26.9% (7-for-26) from three. Tim Hardaway Jr. was the only real threat for New York, leading all scorers with 22 points. After giving up 58 points in the first half, the Heat clamped down to give up just 39 in the second half, in part thanks to their work on the glass, where they out-rebounded the Knicks 55-46.

From beyond the arc, the Heat knocked down 12 treys as opposed to the Knicks’ seven, knocking them down at a 36.4% clip. Ellington led that effort with four three’s of his own, with Justise Winslow and Josh Richardson each hitting two three’s.

One bad note for the Heat emerged from this game though. Explosive forward Derrick Jones Jr. went down with a scary injury to his right knee in the second quarter. He exited the game and was unable to put weight on his right leg. An MRI was scheduled for Jones for Monday.

A scary moment in MSG, as @MiamiHeat wing @TheRea1DJones collapses under the basket with what appears to be a leg injury. He had to be helped off the court by teammates. #NBA pic.twitter.com/pVt1EzGdbO

The Heat are back in action Wednesday against the Bulls.