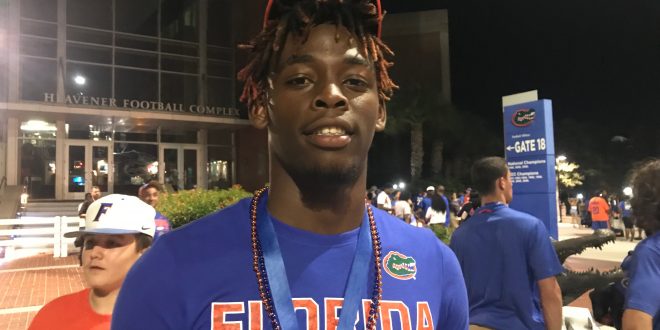 Gator Recruiting Is Hopeful For The Future

The Gators are winding down on the 2019 recruiting trail, as National Signing day is in less than a week way (February 6th). This weekend, however, they are also getting ready to have a number of 2020 kids on campus for Junior Day.

Since the new year, the Gators have had a number of potential guys on campus. Kicker commit Tyler Waxman and long snapper commit Chase Whitfield both took their officials last week. The pair committed shortly after.

One of the Gators commits that’s been a great recruiter for the program is 4-star ILB, Diwun Black. He committed back in August and is planning to sign on the 6th. A newer commit for the Gators is, Arjei Henderson. He’s a 4-star WR from Texas. Henderson and Black are the only verbal commits left to sign their letters of intent for the 2019 class.

A future star for the Gators?

Kaiir Elam is a 4-star CB and according to 247, he’s between Florida and Georgia. One of the Gators highly sought after guys, is Mark-Antony Richards. He’s a 4-star athlete and in addition to Florida, he’s also considering Auburn and Miami according to 247.

The Gators have a talented group of guys who’ve already announced on Twitter that they’ll be coming to Florida’s Junior Day. Fenley Graham, a CB from Lakeland, FL should be present. Along with Demarkcus Bowman, a 5-star RB the Gators will surely be looking to impress.

Someone else on the Gators radar is Issiah Walker Jr. He’s a 4-star OT that is committed to South Carolina. And Gator commit, Leonard Manuel, who’s a 4-star WR will also be at Junior Day.

With seven commits the Gators 2020 class is currently ranked 5th in the Country and the 2019 class is ranked 14th in the country with 23 commits according to 247.