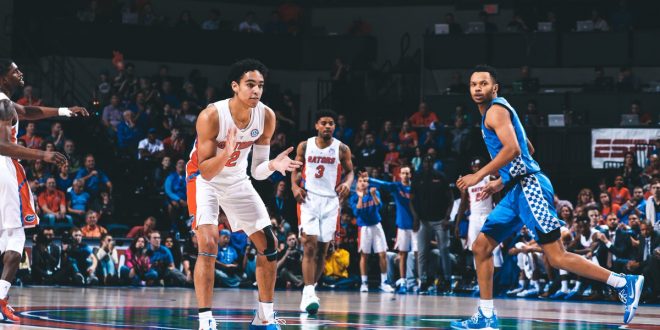 Gators Come Up Short Against No. 7 Kentucky

The Florida Gators held onto the lead for most of the game, but the Kentucky Wildcats got hot in the final four minutes to secure a 65-54 victory.

Andrew Nembhard paced the Gators with 12 points and 3 assists, while Keyontae Johnson added 8 points and 10 rebounds, including 5 offensive boards.

Tyler Herro led the Wildcats with 19 points on an extremely efficient 8 shot attempts. The freshman hit a dagger three-pointer to put Kentucky up by 7 points with 2:52 left in regulation.

PJ Washington continued his strong season with 15 points and 12 rebounds.

Final from the O'Dome, on to the next one. pic.twitter.com/kXWtcpnHkz

Once again, the Gators were in control for a majority of the game but struggled down the stretch. They were up by 11 points with a little under 14 minutes left, but the Wildcats outscored the Gators 34-12 to close out the game.

This is a major trend for the Gators, who have had an opportunity to win every single game this year besides their season opening blowout loss to Florida State. They continue to blow late game leads against all levels of competition.

Florida couldn’t have asked for a better first half against the red hot Wildcats, who have now won eight straight games. They limited the Wildcats to 12-34 (35.3%) from the field and 3-14 (21.4%) from beyond the arc before the intermission. The Gators led 33-29 at the half, and continued this strong play for the first 6 minutes of the second half.

Kentucky, who has a major size advantage over most of their opponents, had trouble taking advantage of the smaller Gators. The Wildcats did win the rebounding battle 46-34, but they only had 10 second chance points. The Gators also outscored the Wildcats 30-26 in the paint. With PJ Washington and Reid Travis, Kentucky has been assertive in the paint all year.

Andrew Nembhard discussed how difficult it is to stop someone as dominant as Washington.

What Went Wrong for the Gators?

Coming into the season, the Gators were supposed to be loaded with depth. However, this has turned into one of their biggest weaknesses. Their bench only produced 13 points, with 11 of those points coming from Jalen Hudson.

Andrew Nembhard, Noah Locke, KeVaughn Allen and Kevarrius Hayes all played over 30 minutes in the loss. This undoubtedly had a negative impact on their legs late in the second half, which is when Kentucky seized control of the game.

White discussed how the excessive minutes for his starters hurt them down the stretch.

Florida corralled 12 offensive rebounds, but only capitalized with 8 second chance points. They struggled to get out in transition with only 2 fast break points.

The Wildcats’ defense stifled the Gators in the second half, surrendering only 21 points.

Big time atmosphere. All out effort but we fall to Kentucky 65-54. See the highlights…#GatorsHoop pic.twitter.com/S328msudIT

The Gators continue their tough stretch of games as they take on the Auburn Tigers on the road at 9:00 p.m. on Tuesday night. The Tigers have lost three of their last four games, but any road game in the SEC is a challenge.

Previous Dunnellon Tigers 4th Quarter push not enough to beat the Eastside Rams
Next No. 2 Gators gymnastics falls short against No. 1 Sooners