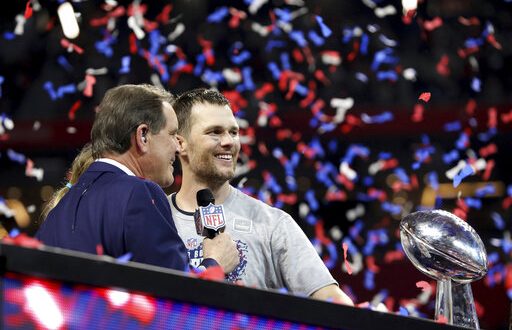 It may not have been an offensive explosion like some were predicting but it’s safe to say Tom Brady is happy with the result.

The New England Patriots defeated the Los Angeles Rams 13-3 in what was the lowest scoring Super Bowl ever. Julian Edelman took home the game’s MVP honors after his 10 catch, 141 yard performance.

It Was A Defensive Struggle

Nobody could have expected the defensive performance that the Patriots put on Sunday night.

Coming into the game, the Rams ranked 2nd in the NFL in points per game (32.9) and yards per game  (421.1). Jared Goff was ineffective as he struggled with the New England pass rush. The 2nd year QB completed 19 of his 34 attempted passes for 229 yards and an interception. The Los Angeles offensive line had a hard time as they gave up four sacks.

The Rams running game that was extremely effective in the postseason was nowhere to be found on Super Bowl Sunday. Los Angeles rushed the ball 18 times for only 62 yards. All-Pro running back Todd Gurley only carried the ball 10 times for 35 yards.

Former Patriots wide receiver, Brandin Cooks, played well after having an underwhelming performance in the Super Bowl before coming off injured a year ago. The speedy receiver caught eight passes for 120 yards, but had two crucial drops that could have been touchdowns.

Former Gator Dante Fowler Jr. made 4 tackles one of them being for a loss.

Patriots Produce Just Enough to Get The Job Done

Not many people thought that 13 points would have been enough to defeat the Rams. Fortunately, it was for the Patriots.

It wasn’t a vintage Brady Super Bowl performance. It was a shaky start to the game as Brady threw an interception on his first pass of the game. He rebounded well as he finished with 261 yards passing. Former Georgia Bulldog running back, Sony Michel, scored the games go-ahead touchdown in the 4th quarter with seven minutes to go in the game. Playing in Atlanta, Michel carried the ball 18 times for 94 yards.

Two more Gators will be receiving super bowl rings as Trent Brown and Duke Dawson were on the winning side on Sunday.

Week 12 of the NFL season began on Thanksgiving with three games that were played. …