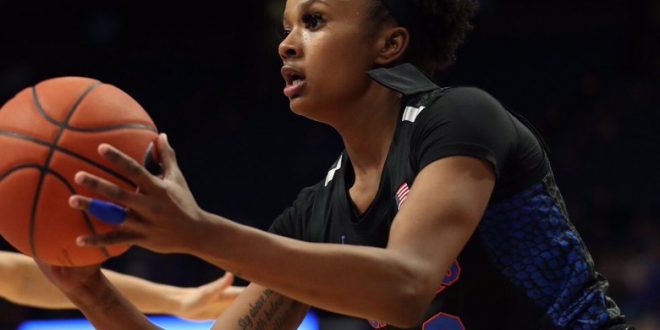 The Gators Women’s Basketball team fought very hard in trying to knock down No.19 Kentucky but fell short 62-51.

The Gators battled hard during in the 1st quarter, coming out of the gates with high momentum and intensity.

By the end of the first quarter, the Gators were tied with the Wildcats, 15-15

Danielle Rainey, who had a season-high game, really came to play for the Gators. She scored 20 points and snatched three rebounds. She started out strong with 9 of the Gators 15 first-quarter points, ending the 1st half with 15 points. Her spree of shooting continued throughout the game, going 7-10 from the field.

Following behind her was Felicia Washington, who came off the bench for the Gators. She had a impressive game scoring 10 points and claiming 14 rebounds. This marks her third double-double of the season.

Coach Newbauer spoke highly of Danielle and Delicia when talking to the media after the game,

” I’m really proud of how aggressively Dani started the game and with how she played with determination on both ends. Delicia did a tremendous job on the glass and she had great poise out there.”

However, Florida was not able to contain their turnover ratio allowing the Wildcats to score on easy possessions.

The Wildcats came into this game with a chip on their shoulder after coming off a two-game losing streak.

Kentucky had three players in double-digits against the Gators. Freshman guard Rhyne Howard was a powerful force for Kentucky after scoring 16 points and adding five rebounds. Two of her teammates joined the fun including Taylor Murray with 13 points and Maci Morris with 10.

The Gators return home on Thursday, February 2 to host the Alabama Crimson Tide. In their last meeting earlier in the season, the Gators fell short by seven points.

However, having home court advantage may change the outcome in this weeks matchup.