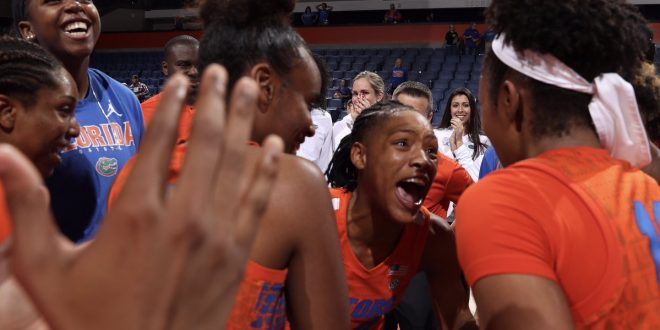 For the first time since Jan. 13, the Gators women’s basketball team walked off the court victorious on Thursday.

Florida entered this week’s SEC matchup against Alabama on a five-game losing streak and a 5-17 overall record. The Gators lost to the Crimson Tide 74-67 in their first meeting in early January. Their rematch against Alabama came down to the wire, however, Delicia Washington’s game-winning shot with under 20 seconds left gave UF the 57-55 win.

After the game concluded, head coach Cameron Newbauer cited his team’s group effort as an important factor in their victory:

After Alabama jumped out to an early 5-0 lead, Danielle Rainey responded with a couple of impressive layups. The Crimson Tide maintained their lead for a majority of the first quarter due to solid defense and three baskets by Megan Abrams.

Florida continued to battle while trailing and even took the lead on a free throw by Delicia Washington. The Gators entered the next period down 13-12 after shooting 39 percent from the field in the first quarter.

As they did at the start of the game, Alabama immediately gained momentum to begin the second frame. The Crimson Tide went on a 6-0 run and held the Gators scoreless for nearly three minutes.

Newbauer’s group responded by outscoring their opposition 9-3 in less than a minute of game time. Florida connected on three triples during that stretch, including two by Rainey to give her 10 points in the first half.

The Gators ended the half down 26-23 despite shooting just 21.1 percent from the field and 23.1 percent from behind the arc in the second quarter. Funda Nakkasoglu, the team’s leading scorer, had seven points on 3 of 8 shooting heading into halftime.

UF was able to get the game tied at 30-30 with seven minutes left in the third period, but Alabama jumped back in front with nine straight points. Although Washington didn’t make a field goal in the first half, the junior got a couple of layups to go in this frame.

The Gators were only outscored 15-14 despite the Crimson Tide having their best quarter of the game. Alabama shot 50 percent from the field and made it to the free throw line six times, capitalizing on four of those opportunities.

In the final ten minutes of game time, Florida saved their best for last during the thrilling conclusion. Nakkasoglu had 11 points down the stretch as she knocked down three crucial triples. The Gators connected on 7 of their 13 shots as a team in the four quarter and scored 20 points, but none of those points were more important than the two that Washington had at the end.

With less than 20 seconds left in the game, Washington put Florida up 57-55 with a pull-up jumper.

Delicia Washington’s jumper puts the #Gators up 57-55 with 12.4 seconds left in the game. @ESPNGainesville pic.twitter.com/TIjJKwiCEd

Washington said that despite turning the ball over in the previous possession, her basketball mentality propelled her to knocking down the clutch shot for UF:

Another person who stepped up for the Gators against Alabama was Danielle Rainey. She finished with double digit points in an SEC game for the fifth time this season. The red-shirt sophomore credited Florida’s staff and her teammates for her productiveness on the court:

The Gators will be on the road once more this Sunday when they take on the Georgia Bulldogs. Tipoff for that SEC matchup is scheduled for 12 p.m.