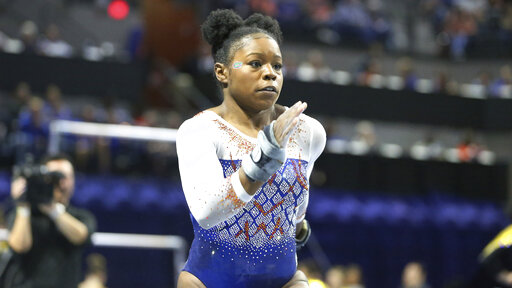 No. 2 Florida tops No. 12 Auburn at home with ease, remains perfect in SEC

The No. 2 ranked Florida Gators extended their loss-free home, SEC and all-time “Link to Pink” records in a big Friday night win over Auburn.

Bouncing back from a failed attempt at trying to top No. 1 Oklahoma last week wasn’t a tough mission. At least, the Gators made it look that way.

Coming into the meet, Auburn posed a unique challenge as the other remaining undefeated team left in the SEC, with wins against conference teams such as No. 5 LSU, No. 6 Georgia and No. 10 Missouri.

The Gators had no qualms with taking that title away from them.

An easy metaphor to describe Florida’s Friday: A snowball effect.

In the initial rotation, Florida produced its best rotation on vault of the season. Alicia Boren’s 9.925 led the team, assisted by Savannah Schoenherr and Trinity Thomas’ 9.9s. These scores established a positive tone. But the overall score couldn’t compete with Auburn’s performance on bars, setting the Gators back slightly after the first rotation. Auburn claimed an early lead, 49.375-49.350.

That lead would be quickly cut short, with Florida’s second rotation on bars allowing them to claim the lead. SEC Freshman of the Week Thomas conducted business, as usual, leading the Gators with a 9.95.

Senior Amelia Hundley wasn’t too far behind, supplementing a 9.9. Meanwhile, Auburn found themselves struggling on vault, which included a 9.225 drop score from Gracie Day from a stumbly landing. Florida would come out on top at the halfway point, 98.775-98.300.

The final two rotations secured the win for the Gators. The third rotation at beam was spearheaded by a crucial three-way effort of 9.9s from Alyssa Baumann, Rachel Gowey and Alicia Boren. Over at the floor, Auburn put together a strong performance. A pair of 9.925s from Day and Abby Milliet would help Auburn surpass Florida’s score for the rotation, but not enough to top overall. The Gators remained in the lead, 148.200-147.775.

The concluding rotation was nothing but total domination. In the team’s best showing of the evening, no score was calculated less than a 9.875 from Hundley. Thomas topped the effort, setting an individual best of 9.975. Boren came right behind with a 9.95. Baumann and Nya Reed put up a pair of 9.925s. Down the stretch, Auburn couldn’t compete, with its highest calculated score a 9.875 from Meredith Sylvia. A tough drop score of 9.1 came from Taylor Krippner.

How the Gators pulled it together

Gators Coach Jenny Rowland emphasized the translation made from practice to the competition floor.

“We’ve been focusing on really just staying calm, and it really showed out on the competition floor today,” Rowland said.

She praised freshman Schoenherr, who was introduced into the floor lineup for the first time her collegiate career and packed a punch in Florida’s scoring efforts on vault and bars.

“She had a lot more on her plate tonight and really handled herself very well,” Rowland said.

The Gators will visit the Alabama Crimson Tide in another SEC showdown on Friday, Feb. 15, airing live at 8:30 p.m on the SEC Network.

Previous P.K. Yonge Defeats Oak Hall for 4A District 1 Girls Basketball Championship
Next Gators Fall to No. 1 Tennessee in Knoxville