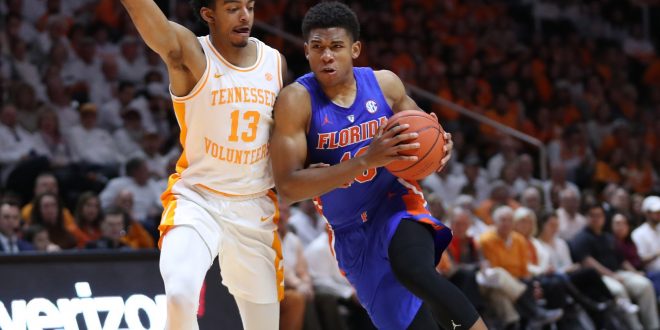 Gators Fall to No. 1 Tennessee in Knoxville

The Florida Gators went into Knoxville hoping to knock off the No. 1 Tennessee Volunteers, but suffered a 73-61 defeat.

Noah Locke led the Gators with 17 points on 5-8 from three. Jalen Hudson had arguably his best performance of the season with 15 points in 24 minutes of action.

The Volunteers are now 22-1 overall, including 10-0 in the SEC. They have won 18 straight games and look poised to continue to roll through conference play.

After the Gators jumped out to a 8-5 lead, they endured a four and a half minute scoring drought which led to a 11-0 Tennessee run. The Vols went up by 16 with a little under 5 minutes left in the first half, but the Gators ended on a 14-4 run to cut the deficit to six points.

Florida went toe-to-toe with Tennessee to start the second half. The Vols lead fluctuated between four and eight points for four minutes after the intermission. However, Lamonte Turner hit two straight threes to extend their lead back up to double digits. The Vols held onto a comfortable advantage throughout the rest of the game to secure the victory.

Grant Williams, Admiral Schofield and Kyle Alexander dominated the interior. These three combined to score 24 points in the paint.  The Volunteers made 28 field goals, with 18 of those coming in the paint.

Tennessee was also able to take advantage with 17 points off of 12 Florida turnovers.

Once again, the Gators had difficulty putting the ball through the basket. They shot 21-59 (35.6%) overall and 8-26 (30.8%) from beyond the arc. It didn’t help that KeVaughn Allen, Jalen Hudson and Dontay Bassett were in foul trouble for a majority of the game. Head coach Mike White was forced to dig deeper into his bench because of these foul issues, which is not ideal on the road against the top ranked team in the country.

In order for the Gators to have had a chance to win this game, they would have needed to take advantage of every possible opportunity. However, this was not the case. They grabbed 15 offensive rebounds but only converted that into 14 points. They also only had 7 fast break points and converted a measly 8 out of 19 layup attempts. The Gators could not have expected to win this game with their shooting woes and inability to take advantage of easy opportunities.

The Gators will head back to Gainesville to host the struggling Vanderbilt Commodores on Wednesday, February 13th at 9:00 p.m. Vanderbilt is currently winless (0-9) in SEC play. The game is being aired on ESPNU and can be heard on ESPN 98.1 FM, 850 AM WRUF.

Previous No. 2 Florida tops No. 12 Auburn at home with ease, remains perfect in SEC
Next Kelly Barnhill shines as Gators take down Wolverines, Wildcats