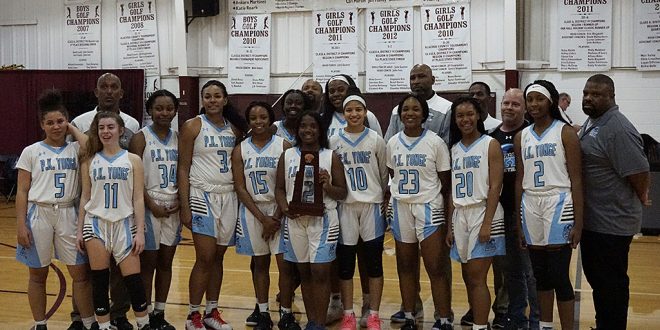 P.K. Yonge is able to hoist the 4A District 1 trophy after a 26-1 regular season. (photo/Steven Walker)

The P.K. Yonge Blue Wave (26-1) defeated the Oak Hall Eagles (11-13), 71-36 in the 4A District 1 girls basketball championship. However, the game was not as lopsided as the score may suggest. The Eagles hung with a very physical and quick Blue Wave team for the first half of play and even into the second half.

The Blue Wave did eventually pull away, though, by utilizing their size advantage and ability to restrict open looks.

Back and Forth Start

Oak Hall opened up the game controlling the tempo and playing the kind of game they could succeed in. The Eagles capitalized off of early turnovers and Shooting Guard Kate Pickens made routine three-pointers to match the Blue Wave’s physicality and size advantage.

However, once the high energy of the Oak Hall crowd wore off a little bit, P.K. Yonge got into their groove. Power Forward Raquel Cassidy and Center Mya Mcgraw’s height advantage proved to be too much for the Eagles.

When asked about the result, Coach Eric Ringdahl said,

“We don’t have any size. My tall kid is in 9th grade and she weighs about 135 pounds. We started 2 eighth graders, 2 ninth graders and a junior. So, we are a team of the future.”

Mcgraw and Cassidy’s height played a significant role in securing rebounds and dominating inside the paint on the offensive court. It also allowed them to stuff Oak Hall defensively with the utilization of their full-court press.

After the first quarter, the Blue Wave led 18-13, but it was all downhill for the Eagles from there. Oak Hall opened the second quarter with sloppier play and more turnovers. Their gameplan operated around their quickness and ability to get open looks, but due to their lack in size, they missed key rebounds and couldn’t compete inside the paint.

Obviously, the size advantage played a key role in P.K. Yonge’s victory. However, the reason it took them a couple of quarters to pull away from the Eagles was that they couldn’t capitalize off of turnovers. Even after forcing turnovers and grabbing offensive rebounds, they still struggled to score in the first half the way they’re accustomed to. Through one half, they led the Eagles, 35-19.

At halftime, PK Yonge leads 35-19. The Blue Wave have forced turnovers and limited open looks on defense to distance themselves from Oak Hall. Should be an interesting second half @ESPNGainesville

In the 3rd quarter, the Blue Wave were finally able to really piece it all together. Their tall players, Mcgraw and Cassidy, still dominated the boards. The difference, however, was point guards Courtney Moore and Grace Cox, and their ability to score outside the arc.

Meanwhile, on the defensive side, they limited Eagles guard Tyla Young’s ability to create by stealing the ball and limiting open looks outside the 3-point line. In the end, the 71-36 final score misrepresented the matchup as a whole because, in the fourth quarter, P.K. Yonge just continued to pour it on.

Oak Hall hung with the Blue Wave deep into the third quarter, though, which they struggled to do in their two matchups prior. Coach Ringdahl said,

“Tonight I think we gave a great effort, we played better than we played the first time. We hung in there quite a while and we gave this team a hell of a game for a while, so I’m proud of their effort.”

While the Eagles couldn’t keep up with the Blue Wave in the district final, they still move on to regional playoffs as the 4A District 1 runner-ups. They will face a more difficult opponent, however, in University Christian. When asked about their upcoming game, Coach Ringdahl said,

“They may be a little bit bigger than [P.K. Yonge] so size-wise our defensive rotation will need to be a little bit cleaner and we’ll have to [communicate] a little bit. Getting these kids to the next level makes us better next year.”

I'm a third-year student at the University of Florida passionate about storytelling and sportswriting. My goal is to work in communications for a professional sports team after I graduate.
Previous Oak Hall boys basketball defeats Aucilla Christian on senior night
Next No. 2 Florida tops No. 12 Auburn at home with ease, remains perfect in SEC