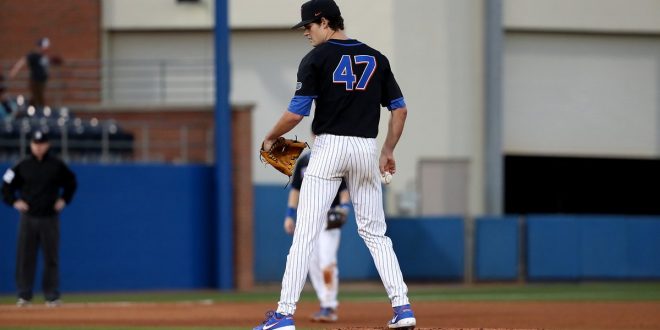 The Gators clinched a series victory over the Long Beach State Dirtbags on Saturday evening with a 5-2 victory.

Three Gator pitchers got their season debuts on the mound in Game 2 against Long Beach State.

Additionally, Mace attributed his success on the mound to the practice that he gets throwing against his teammates.

In addition, freshman Christian Scott entered the game in the top of the eighth. Scott allowed no runs or hits and struck out one batter.

Lastly, freshman Nolan Crisp got his debut in the ninth inning. Crisp also recorded no runs or hits and struck out one batter.

Crisp also recorded his first career save in the final inning of the game.

After a scoreless first inning, the Gators got things rolling in second. A series of three straight hits from senior Blake Reese, freshman Jud Fabian, and junior Austin Langworthy.

Firstly, Reese got things going with a double to bring home freshman Kendrick Calilao and sophomore Brady Smith, putting the Gators up 2-0.

Fabian recorded a double of his own to bring in Reese for the run. Langworthy added a single to put the Gators up 4-0 at the bottom of the second.

Likewise, the Gators kept up the momentum in the third inning both offensively and defensively.

At the top of third, Fabian scooped up a line drive to center field and made a monster throw to get Long Beach State’s Tanner Carlson out at home plate.

The freshman's got a HOSE! @judfabe

Additionally, the Gators continued their offensive success in the third inning. Senior Nelson Maldonado recorded a run to put the Gators on top 5-0.

In the top of the fourth, Long Beach State fought back to record two runs after a series of hits. Luke Rasmussen and Aidan Malm each recorded a run for the Dirtbags.

The Gators will finish their series against Long Beach State Sunday, February 17 with pitcher Jack Leftwich getting the start.

Previous Preview: No. 8 Gators women’s golf has plenty to juggle at Allstate Sugar Bowl
Next Gators Ring Up Double Digits Against Toreros and Aggies