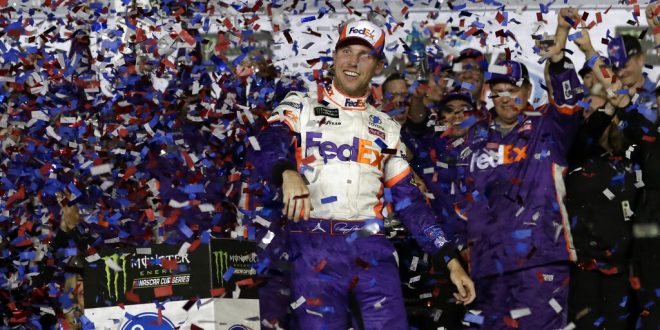 Denny Hamlin left the Daytona 500 with a victory that featured a 21 car pile-up and only 14 drivers to finish the race on Sunday.

Notably, J.D. Gibbs helped his father start the team and ran it while Joe Gibb’s coached the Washington Redskins.

Admittedly, once Hamlin stopped to collect the checkered flag, he was met by the entire Gibb’s family and credited the win to their family.

On the other hand, a massive crash affected over 18 cars near the lead.

DiBenedetto led for 49 laps of the race prior to the crash as Kyle Busch was in the lead at the time, with Denny Hamlin and Clint Bowyer behind.

The contact between the two led for a red flag as the track had to be cleaned.

So, after this incident, there were two more crashes that involved one under two laps remaining. Only 19 cars were running on those final two laps. Just 14 led the lap and none were able to challenge Hamlin.

Kyle Busch and Erik Jones finished second and third as JGR became the second team in NASCAR history to sweep the Daytona 500 podium.

Busch who has 194 wins across NASCAR’s top three series fell short in his attempt to win the sport’s biggest prize.

Even though he was a runner-up, he still saw a win from a team standpoint.

The 2019 Monster Energy NASCAR cup series moves on to the Folds of Honor QuikTrip 500.

The race will be held at Atlanta Motor Speedway on Sunday, February 24 at 2 p.m., on FOX.