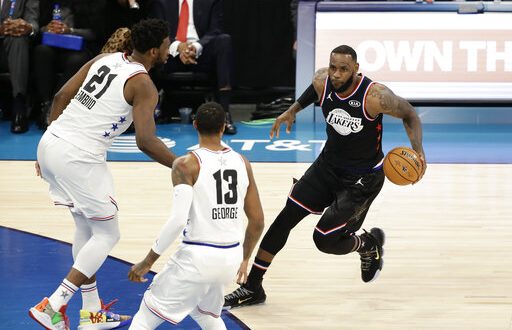 The NBA’s biggest superstars put on a show as usual in Charlotte, North Carolina as Team Lebron overcame a 20-point deficit to defeat Team Giannis 178-164.

Another Lebron Team Makes A Comeback

Already known for leading one of the biggest comebacks in NBA finals history, Lebron James’ team had another strong 2nd half showing.

Team Lebron found themselves down 95-82 at halftime. They went on to outscore Team Giannis by double digits in both the third and fourth quarter. The run came in the third quarter when Damian Lillard and former Florida Gator Bradley Beal helped Team Lebron go on a 18-4 run.

In a losing effort, Giannis Antetokounmpo had a double-double scoring a game-high 38 points and grabbing 11 rebounds.

Nowadays, the actual all-star game tends to show better dunks than the dunk contest itself.

2019 was not different as the NBA’s best talent did not disappoint.

Steph Curry and Giannis Antetokounmpo hooked up for one of the most unique dunks of the night as Curry bounced passed a ball over Kevin Durant to Giannis.

Another look at #Giannis in transition!

Follow Giannis for the 2nd half of the 2019 #NBAAllStar Game – NEXT on #NBATwitterLive pic.twitter.com/QjvDS71xMZ

There is nowhere more fitting for a 360-degree dunk than the all-star game. Paul George made sure the fans at the Spectrum Center did not leave empty-handed with his electric dunk.

The two were placed on the all-star roster by NBA commissioner Adam Silver. Both of them showed why they have a combined 27 all-star game appearances.

The most sentimental moment of the night came when Dwyane Wade and Lebron James produced what fans are now calling the “One Last Lob.” Between 2011-2014, Wade and James produced countless highlights with their electric alley-oops. The duo made sure fans got one more chance to see it.

The Race to The Postseason Begins Now

Now that the glitz and glamour have concluded, teams will be making a push for the postseason. NBA action returns on Thursday.